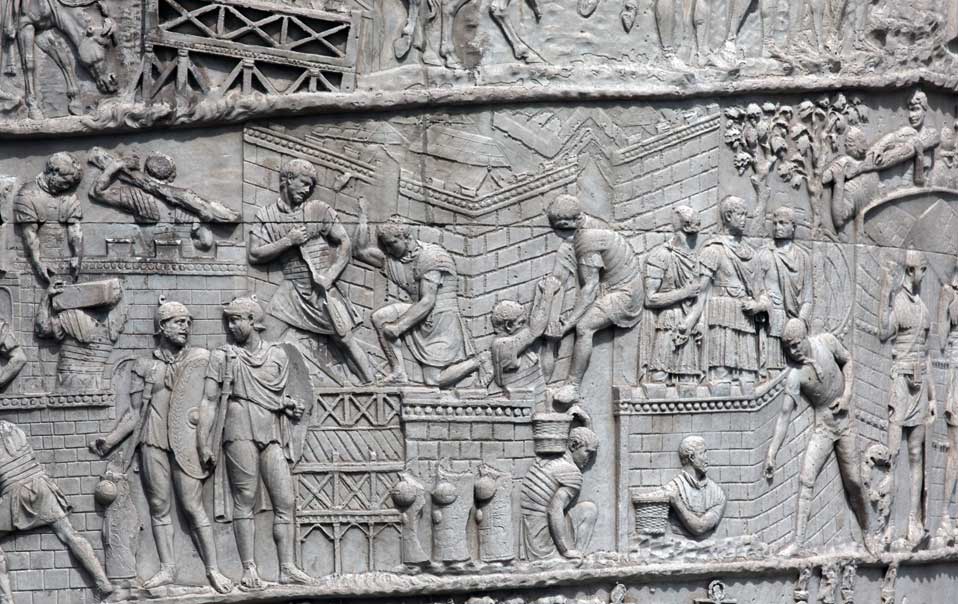 The Roman fortification, whether it was a temporary overnight camp in enemy territory, an auxiliary outpost fort set to guard a strategic location, or a large fortress to garrison the might of the Roman legions, was almost invariably built to the same basic formula. Although Roman camps have been found of various shapes, by far the most common form is that of a quadrilateral with parallel sides and rounded corners. The outline of the fortifications can generally be used as a rough guide to the period in which they were built. The traditional ‘playing-card’ shape is typical of the first century, whereas by the second and third centuries, squat, square-shaped forts predominate. By the fourth century the Roman military began to depart from this strict, angular form, as attested by the ovular outline of the Saxon Shore Fort at Anderitum (Pevensey).

A Roman camp was always enclosed by a defensive system comprising at least three components;

Within the defences, the camp was divided into three main areas:

The areas within the camp were delimited by a number of roads:

The defences were pierced by gateways, usually four, at the termini of the major internal roads:

The dimensions and complexity of these defensive elements would obviously depend on the size of the force the camp was intended to house and the period of time that the encampment was planned to be occupied.

There are traditionally three main types of Roman fortification; the Marching Camp, the Auxiliary Fort and the Legionary fortress. To these three basic types there has been recently added a fourth classification, that of Vexillation Fortress.

There are also smaller fortifications such as Fortlets, Signal Stations, Light Houses and Watch Towers. Of these types, the Fortlets may be viewed simply as small forts posessed of an unorthodox interior layout and with no administrative buildings, but these latter classes which, in general, are localised in their distribution within Britain and often unique in construction, are therefore not included in this general discussion.

We will deal here with the Four revised types of Roman Military Establishment;

In a temporary overnight camp not intended for re-use after the force had moved on the following morning, the agger may be formed merely from the piled-up outcast from the fosse, surmounted with a rough palisade of stakes thrust into the earth along the top of this bank. The overall width and size would vary depending on the number of men available for the task.

The Roman marching camp was constructed in the following manner:

The Auxiliary Fort or Campaign Fort

A tactical auxiliary fort, built to last at least one campaign season guarding an important site, were built with more intrinsic strength and solidity. The usual method from Caesar’s time and throughout the 1st century A.D. was to build a rampart of turf retaining walls, but by the 2nd century the preferred method was to replace the front facing or both retaining walls in stone: