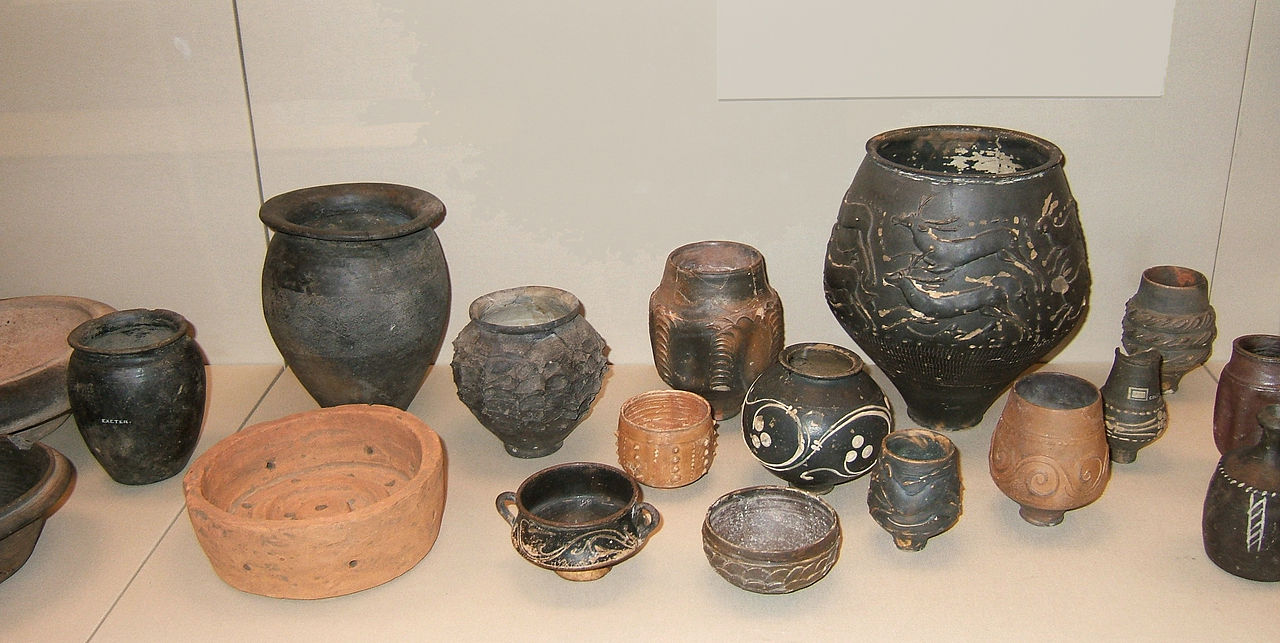 Roman shops, as we have seen, were places where tradesmen not only sold things but also made them – on the spot. Every town in Roman Britain had its small scale crafts and industries, and in some of the larger towns there were specialised crafts. At Silchester, for example, there was a silver refinery, and at Caistor a glass factory.

Some smaller towns, however, were rather like industrial estates, the main road through them being lined with workshops. Two such towns are Camerton (Avon) and Wilderspool(Cheshire). At Camerton, on the Fosse Way, a dozen large stone buildings were associated with a series of ovens and furnaces, some of which were probably for iron and bronze working, but others of which may have been for malting barley and for pewter working. At Wilderspool there were probably twice as many buildings and a wide variety of crafts were practised. Iron, bronze and lead were all worked here and glass and pottery were manufactured. Some workshops managed to combine two such crafts, and we find bronze brooches for example, which are decorated with glass inlays.

These were all manufacturing crafts, but the raw materials they used were supplied by extractive industries in the countryside. Camerton and Wilderspool were situated near some of the resources they needed, but other materials were brought long distance’s by road or water. With manufacturing crafts concentrated in, or near the towns, good communications very important.

Some of the commonest tools found on Roman sites belonged to blacksmiths, and it is common for their workshops to be found. Apart from their own hammers, sets, tongs and anvils the blacksmiths made a very wide range of other tools which enabled other craftsmen to ply their trade. Carpenters, for example, could buy saws, chisels, gouges, and planes from a blacksmith. Many farmers employed smiths to make spade-irons, plough­ shares, sickles, and a host of other agricultural tools.

In contrast to iron, pewter working was limited to a small number of workshops. Pewter, being an alloy of tin and lead, was a craft which was particularly centred around the Mendip lead mines. Evidence of manufacture has been found Camerton, Bath, Nettleton and Gatcombe. It was particularly used to manufacture sets of dinner plates, dishes and flagons.

Another craft with a regional focus was jet-working. This shiny black material – not unlike. coal – was extracted in the Whitby region of Yorkshire and used to make small signet rings, medallions and brooches, and other items of jewellery. These things found a market throughout Britain and were also exported to the Rhineland. A somewhat similar material, shale, was used for bangles too, but was made into spindle whorls, and a variety of small objects for the home. Around Kimmeridge in Dorset, where the industry had a long ancestry, shale was turned on a lathe and used for decorative chair and table legs.

A certain amount of pottery was imported into Britain, mainly from Gaul and Germany but also (in the form of amphorae) from the Mediterranean. Whilst amphorae came as containers for wine and sauces, Rhenish ware from Germany and samian pottery from central and southern Gaul were imported as high quality table-wares. The glossy red samian ware occurs on most town and villa sites and was clearly popular amongst the Romanised elements of the British population.

Much of the pottery used for everyday purposes, however, was made at small local kilns which supplied perhaps a nearby town and several villas and farmsteads. Such kilns might be situated just outside the walls of a town, like those outside the south-east gate of St Albans, or they might be in the countryside and perhaps part of a villa estate. These potteries normally produced a range of cooking vessels, storage jars, and perhaps simple tableware.

The kilns themselves were usually circular structures with a raised floor on which the pots were stacked for firing. The floor might be of thick clay with circular perforations through it, or a series of clay bars which rested on the side of the kiln chamber and were supported by a pedestal in the centre. A small, local pottery might have four or five such kilns, but far more were used by the important pottery-producing centres which supplied whole regions and specialised in the production of particular types of pottery.

In the New Forest and the Nene valley, the potters were particularly known for their table-ware, which was usually coated with a brown or black wash. The New Forest pottery may have been produced as a part-time activity by local farmers, but the Nene valley beakers were decorated with hunting scenes in low relief.

Some of the New Forest wares, and others produced by the important potteries around Oxford, were covered with a red wash or slip which attempted to provide a cheap imitation of the imported samian ware. Alongside this table-ware the New Forest and Oxford kilns also produced grinding bowls, or mortaria, for use in the kitchen.

Most mortaria, however, came from specialised factories of which those at Colchester, Brockley Hill, Mancetter and Hartshill were the most important. In the first and second century mortaria manufacturers used to stamp their names on their products, and it is possible to trace the careers of individual potters in this way.

The success of the mortaria potteries was outstripped by that of the potteries of southern Dorset which specialised in the production of cooking vessels. The Black Burnished Ware, in which they made a range of upright cooking pots flanged bowls and pie-dishes, was traded throughout the province and frequently imitated.

Lead was considered an important material by the Romans since they could extract silver from it with which to make coinage. Thus the Romans began to mine lead in Mendip, Flintshire, Derbyshire, and the north of England as soon as they conquered these areas. The mines were kept under Imperial control, at first overseen by the army and later by civilians who leased the mines from the emperor.

Charterhouse on Mendip was the most important centre in Britain, and there are still traces of the fort and amphitheatre associated with the mining settlement which grew up there. When the lead from Mendip (and other mines) had been de-silvered, it was cast into ‘pigs’ (bars) ‘weighing about 200 lbs each and could then be carted away for sale. ‘Pigs’ of lead were often stamped with inscriptions. Initially they were the names of the emperors in whose reigns they were made and the names of either the regiments or the individuals who oversaw their production.

The latest dated pig to be found in Britain belongs to the joint reign of Antonius and Verus, 163-9 AD. After this date it is believed that the ownership of the mines passed into private hands, for imperial stamps cease to be found. The Second Legion Augusta controlled the Mendip mines for many years, but later a group of lessees known as the Novaec Company are to be found inscribing the pigs.

The lead was used for a variety of purpose , but particularly for pipes to carry water for bathing. In Bath, the great hot bath itself was lined with lead, and the baths and their lead sheathing can still be seen to this day. Some British lead seems to have been exported, and a lead cistern found in Pompeii was probably made of Mendip lead.

Apart from lead and silver, other metals were extracted in Roman Britain. Like silver, gold was so valuable that it was mined under the direction of the army. At Dolaucothi in Northern Wales the shafts of the Roman gold mine can still be seen, and nearby is the fort from which the work, was directed. In north Wales and Anglesey it was copper that was mined, and this was undertaken both by civilian companies and – on a part-time basis –  by native farmers. Similarly, the production of tin in Cornwall seems to have been largely the concern of the local people. Far more widespread was the production of iron. There were particularly important deposits which were worked in Roman times in the Weald of Kent, the Forest of Dean and in the east Midlands. Those in the Weald may have been used to produce iron used by the army and the fleet, but in the east Midlands it again appears to be the concern of the native population. In some cases, the production of iron seems to play a part in the economy of country villas, as seems to be the case at Great Weldon (Northants). Lumps of smelting debris here weighed up to 80 lbs each!

Alongside traditional ‘bowl hearths’ for smelting, the Roman period saw the introduction of shaft-furnaces ‘5ft-6ft high, in which greater amounts of iron could be efficiently smelted at one operation.

Most regions of Britain had supplies of stone which could be used for building the walls of houses, shops, temples, markets, and indeed town-walls themselves. Sandstones, limestones and flint were common materials for these purposes, and some of the finer sandstones and limestone were used not only for walls but columns, balustrades and other architectural items. There were two stone industries which were particularly important in this respect.

The attractive limestone found around Aquae Sulis (Bath) was widely used for both full-sized and miniature columns, and for roof decoration (finials), as well as being employed for the manufacture of altars and inscribed slabs.

Some of the finest inscriptions set up in Roman towns in southern Britain, however, were made of another stone known as Purbeck Marble, from Dorset. The famous forum inscription from St Albans and the inscription from the temple of Neptune and Minerva at Chichester were both made of Purbeck Marble. This stone was also used for decorative slabs around the base of walls and occasionally for columns.

Although the stone was obviously quarried in the countryside, it was often taken to a nearby town for working. From Bath for example, we have inscriptions referring to both a stonemason (called Priscus) and a sculptor (named Sulinus)

Some Other Industries and Crafts

Obviously there were many other crafts in Roman Britain than those we have been able to mention so far. Bakers and cobblers, butchers and carpenters all played their part in the life of the province. So too did the mosaicists who were kept busy, particularly in the fourth century, laying attractively patterned floors in town and country houses alike. Over 400 surviving mosaic floors are known from villas alone, so that the total number laid in the province must have run into- several thousand.

There were also extractive industries other than the mining and quarrying described earlier. The production of salt by the evaporation of sea-water, either in pots or in clay evaporation tanks built at high tide-mark, was undertaken in the Fens, on the Somerset Levels, and along the coast of Essex. Salt found a ready market because it was used to preserve food.

The preparation of food stimulated two other industries. In the Roman world corn was ground on rotary querris (millstones) to make flour, and there were quern factories using local stones in many parts of Britain. A well-known example is that at Wharncliffe (Sheffield), producing querns of Millstone Grit.

Although most food was cooked or baked on wood fires a number of ovens and hearths have also yielded lumps of coal. Some of this was mined from the coalfields of Nottinghamshire and Somerset, and a Roman writing in the 3rd century A.D. (Solinus) actually mentions its use at Bath.

Roman shops, as we have seen, were places where tradesmen not only sold things but also made them – on the spot. Every town in Roman Britain had its small scale crafts and industries, and in some of the larger towns there were specialised crafts. At , for example, there was a silver refinery, and […]