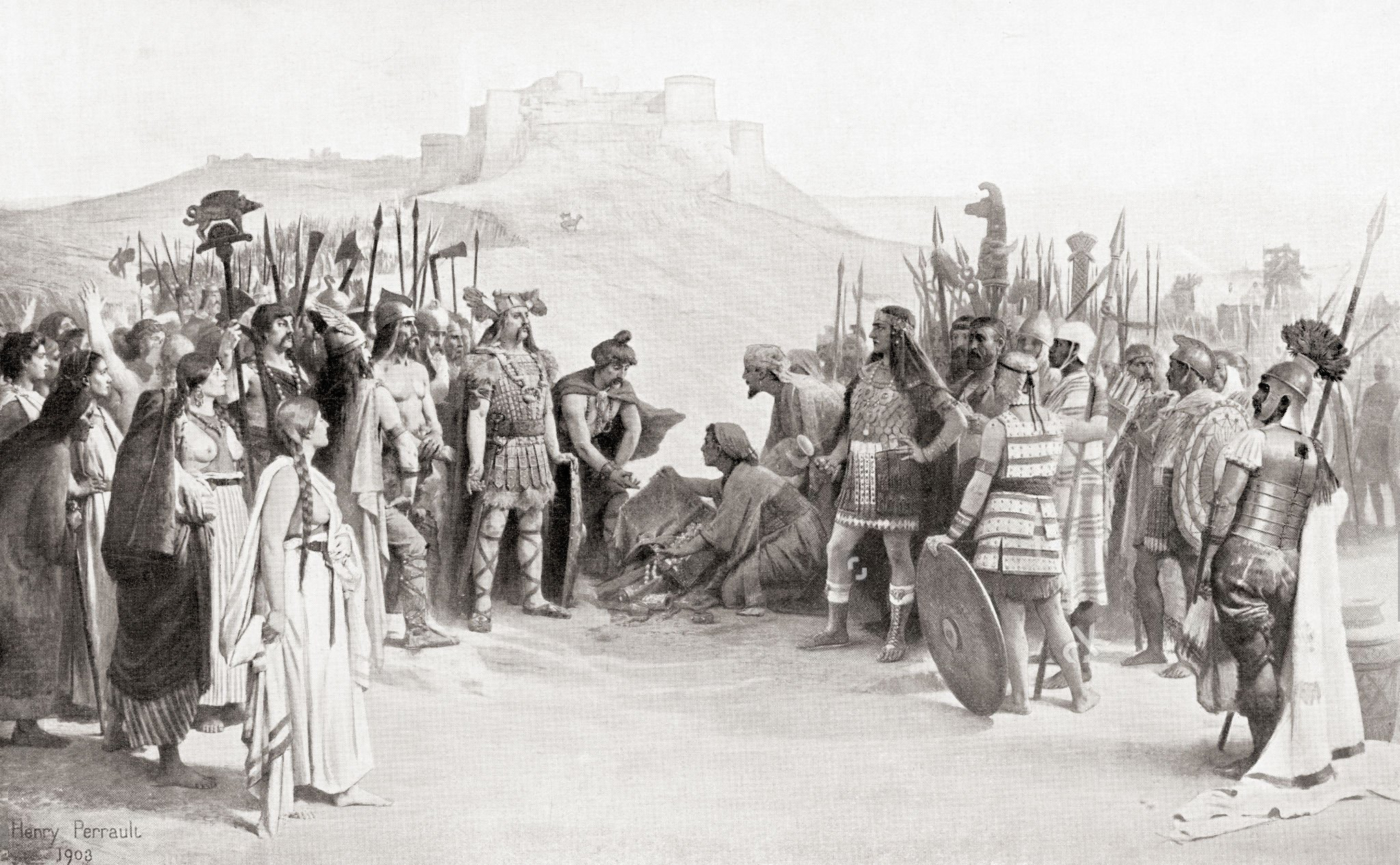 Society in many Celtic tribes was hierarchical. At the top were rulers and elite warriors, then there were the religious leaders and repositories of the community’s collected knowledge, the druids, who were exempt from taxes and military service. Then there were specialised craftworkers, traders, slaves, and farmers – the largest group by far in societies that were rural and agrarian.

Among all the Gallic peoples, generally speaking, there are three sets of men who are held in exceptional honour; the Bards, the Vates and the Druids.​ The Bards are singers and poets; the Vates, diviners and natural philosophers; while the Druids, in addition to natural philosophy, study also moral philosophy.

Throughout Gaul there are two classes of persons of definite account and dignity. As for the common folk, they are treated almost as slaves, venturing naught of themselves, never taken into counsel. The more part of them, oppressed as they are either by debt, or by the heavy weight of tribute, or by the wrongdoing of the more powerful men, commit themselves in slavery to the nobles, who have, in fact, the same rights over them as masters over slaves. Of the two classes above mentioned one consists of Druids, the other of knights.

Based on archaeological evidence – some graves contain much more valuable goods than others – it is postulated that there was a hierarchical social structure and the aristocracy placed a heavy emphasis on warrior status and prestige.

Kings are attested in western Europe in the prehistoric period by the classical authors, although the institution was in decline in some parts by the early first century BC. According to Caesar, in some parts of Gaul the civitas was ruled by a senate, in others by a ruler (such as a king), and sometimes by some combination of the two. Caesar also mentions a Gaulish council with broader territorial influences made up of prominent members of the senates of several nations and other leading men of Gaul, probably an international body meant to resolve disputes. Some tribes had two monarchs ruling at the same time. Over time, this system of monarchy gave way to a more complex government consisting of confederations of tribal chiefs and individual tribes run by councils of elders.

In some tribes, there seems to have been a chief magistrate, “Summus Magistratus.” He had the power of life and death, and was elected by the priests and magistrates. He was appointed for a year only, and he could not leave the territory of the city. Magistrates appear to have been solely male.

The Nobles and Craftsmen

Below the king or queen came the chief nobles, landowners and heads of families or clans. In Gaul, the priests always came from this class, and there is good reason to believe that the same pattern obtained in Britain and in Ireland. Of comparable social status were what we might term the intelligentsia, the aes dána, who included not only the druids, but also bards, jurists, physicians, historians, artists and skilled craftsmen.

That warriors enjoyed a high status in Celtic society is suggested by the number of gods in the ancient Celtic pantheon associated with war and the great quantity of weapons and armour found in tombs. Courage and prowess in battle were greatly esteemed. The warrior noble would have rode into battle on a horse and possibly worn a helmet and metal or padded armour.

Caesar specifically states that the druids had the rank of equites, a word which literally means ‘horse riders’, but is usually translated as ‘knights’. These were not knights in shining armour; rather; it means that druids were equivalent to senior members of the royal family, and there are, indeed, examples in the classical and vernacular texts of druids being described as if they were of equal rank to kings, since they frequently gave judgment on kings. Ovates were prophets, or interpreters of omens. Bards (poets, chroniclers, writers of eulogies and satires) were particularly important, since singing the praises of a noble was a public way of honouring his status in society.

Among other groups prominent within society that can be recognized from the written sources and from the archaeological record are specialists of varying degrees of skill. These people include musicians and poets, craftspeople, and warriors. The accompaniments in male graves indicate that warriors constituted a significant proportion of male adults in some areas. The grave goods that typically identify them are swords (of iron, sometimes encased in elaborate decorated bronze sheaths) and spearheads. Defensive equipment, which is rarer, is dominated by metal shield fittings (usually for shields made of organic materials that have rotted away) and helmets, the latter including ornate examples displaying the status of the wearer rather than simple protective military gear.

Specialists also seem to have had considerable, but perhaps variable, status in society. Some are recognizable in death from the equipment placed in their graves, as, for example, the medical doctor of the La Tène C period identified from his instruments at Obermenzing near Munich in Bavaria, Germany.

The third class, were the basis of the Celtic tribe, the equivalent of the plebs, comprised the body of freemen, commoners, minor craftsmen and small farmers, and warriors who formed the basis of society. This subsection of Celtic society was the group that paid the taxes, elected officials to their assemblies, and provided the largest part of the military when needed. Nearly every male in Celtic society could be called up to fight for his tribe. These warriors would be the foots soldiers of a Celtic warband, armed with a spear and shield and possibly a sword.

At the bottom of the social scale were slaves.  Slavery was very much a part of life in the ancient world. In fact the basic unit of currency in ancient Ireland was the cumal, or woman slave. You could end up a slave if you had overwhelming debts and sold yourself into slavery, or if you were taken in battle. The Irish often raided the coast of Britain, stealing slaves in the night from the rich Roman villas. Indeed, this was how St. Patrick made his first journey to the Emerald Isle—in chains.

The possibility of women holding positions of high status in their own right, rather than by virtue of their male relatives, seems to have varied.

Women do not appear in positions of overt political power in Gaul at the time of Caesar’s campaigns. We know that some women were chiefs in Celtic Britain, for example, Cartimandua, ruler of the Brigantes tribe in the north of England in the mid-1st century CE, and Boudicca (d. 61 CE), queen of the Iceni tribe, who led a revolt of several tribes against the Roman occupation in 60 CE. Whether we are looking at the aberrant behaviour of a peripheral backwater in a time of unnatural stress or the survival of a phenomenon once more widespread throughout the Celtic world is difficult to say. Some of the richest graves of the early Iron Age in central Europe were certainly the burials of women.

In Gaul, females had legal rights in marriage. A joint account was kept of the marriage wealth, composed of the bride’s dowry, an equal sum contributed by the husband, and any interest accruing. Whoever survived the marriage inherited the total. The equity of the arrangement must, however, have been somewhat diminished by the fact that the husband had the power of life or death over his wife and children and if husbands died in suspicious circumstances wives could be interrogated under torture.

Over time, many tribes joined together for mutual assistance or became dependent on another, more powerful one and so paid some kind of tribute. By the end of the period, there were large confederations of tribes, joined to meet the common threat from the Romans. So, too, some tribes became the clients of more dominant tribes and so were obliged to make payments of goods or provide hostages (typically young men to perform as vassals).

The aristocracy used the bonds of patronage they had with their followers to maintain their own social status. Rulers maintained the loyalty of their followers through gift-giving, organising Celtic feasts, and social display in exchange for loyalty and service. This was much like feudalism in the Middle Ages. Celts of sufficiently high status to have clients might themselves have a patron of higher status, with chieftains and even kings being clients of more powerful rulers.

Fosterage was an important bonding agent in the fabric of Celtic life. Ties were reinforced between families by fostering children with other aristocratic families, a method also used to bind different tribes together in alliances. The foster-parents would teach the child the arts of war and statesmanship. The advantage to the foster-parents was that they could ally themselves to a powerful royal or noble house, with all the advantages of status and political power afforded by such an alliance. The advantage to the natural parents was that strong ties could be established with the foster family, so that in times of war it would be very easy to call on that family for material and military support, and so pull together large and effective fighting forces.

Fostering is a theme referred to in Irish vernacular literature, where the close bonds between foster brothers are used to heighten literary effect.

The taking of hostages, referred to above, was equally widespread. It did not, however, bear the connotations it has in the modern world. Among the Celts, hostages were usually young men of noble families from one tribe who lived and served with another as a guarantee of agreed behaviour between the tribes: it was, in fact, a bonding mechanism.