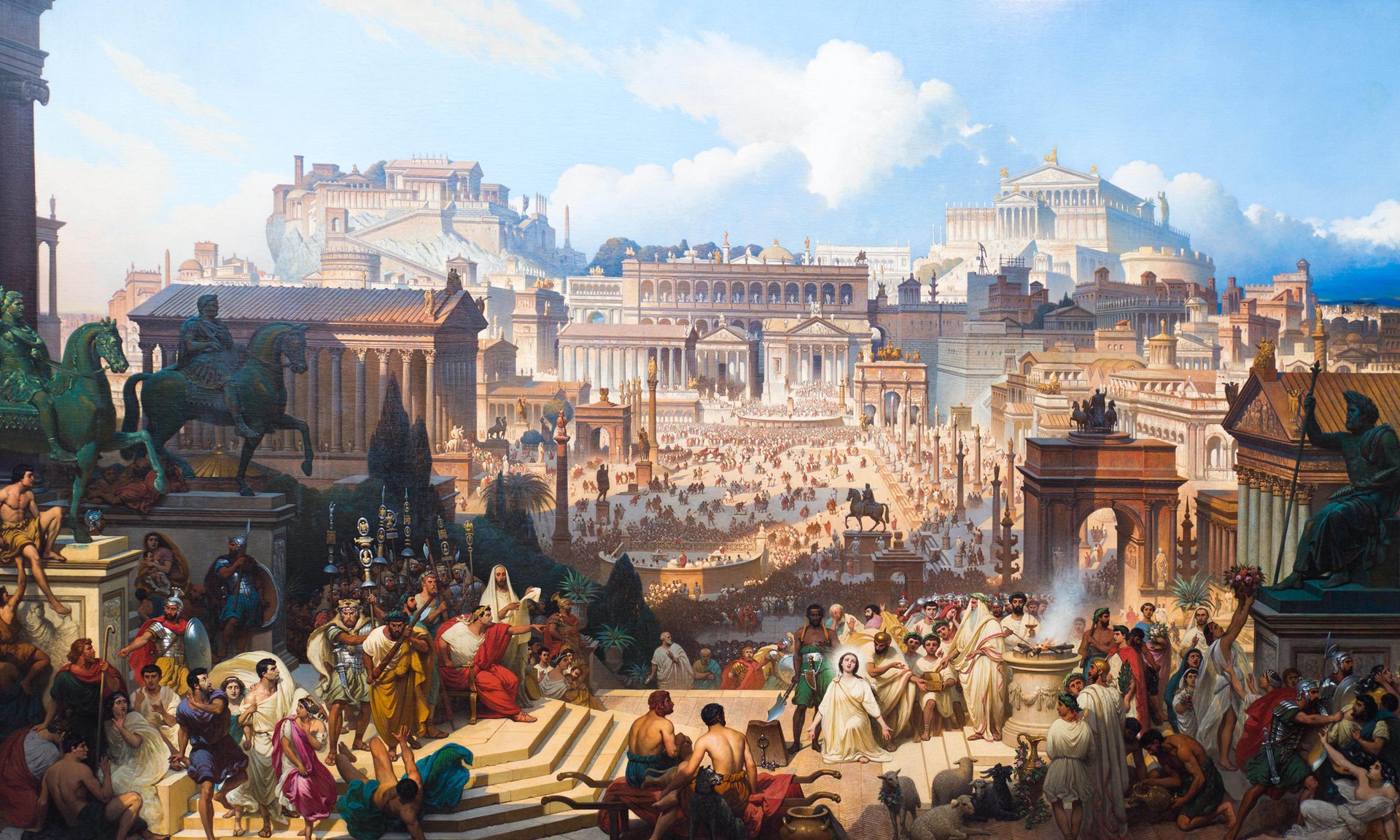 The Romans built towns all over Britain as centres to administer the people they had conquered. The towns that emerged in Roman Britain were radically different from the former Iron Age oppida. They had much in common with the towns that developed across the rest of the Empire.

The Romans built towns in lowland areas, such as at fords across rivers, in contrast to the earlier Neolithic and Iron Age practice of building settlements on high ground above the valleys.

Basic Plan for a Roman Town

The basic layout of a Roman town was that two main roads would cross in the centre at right
angles: the cardo maximus (‘biggest hinge’ or ‘heart’) oriented north to south and the decumanus maximus ( ‘largest street, which divides the area into tenths’) orientated east to west. The cardo maximus was generally lined with shops and vendors, and served as a hub of economic life. The other streets would be laid out in a grid with streets which were between five and eight metres wide. This criss-crossed the town similar to a chessboard and formed form blocks which were called ‘insulae’.

In the middle was the ‘forum‘, a big market square where people came to trade.  It would have shops and offices on three sides and government offices, called the basilica on the other side. Other major public buildings to be found in Roman towns were temples and communal baths.

The roads in the town would have been 5m to 8m wide. Due to the heavy use, the roads would be regularly repaired and completely resurfaced every 25 years. This lead to the road surface increasing in height over the years. The consequence of this is that many roadside shops eventually had entrances below road level.

Town defences started to appear in the late second century. These took the form of massive
walls, often with bastions added later. Typically, there would be four gates, one at each end of
the two major roads.

Towns were semi-autonomous units of local government, assigned specific territory and often given fiscal and judicial responsibility for larger areas of the countryside.

The Romans encouraged the growth of towns near their army forts. The word ‘chester’ comes from the Latin word ‘castrum’ which means ‘a fort’. If a place-name has ‘chester’, ‘caster’ or ‘cester’ in it, it’s almost certainly Romam. Gloucester, Worcester, Colchester, Doncaster and Manchester are good examples.

The legal status of towns needs to be understood as hierarchically related to privileges enjoyed by their citizens. There were three main categories of major towns: coloniae, municipia and so-called civitas centres.

The Coloniae of Roman Britain

A coloniae was the highest rank of a Roman city. Throughout the Empire period, former legionary bases were often converted to coloniae by granting land to retired legionaries. The thinking was that these legionaries would raise families and provide future recruits to the legions, which were only open to Roman citizens. Augustus introduced the practice of cash gratuities, although land allotments were still made. When large numbers of men were retired in the same area at the same time coloniae were made. Each legionary would recieve a plot of land in the town and also in the territorium – the country surrounding the town.

Eburacum (York) was raised to the status of coloniae probably at the time when it was the residence of Severus and the other members of the imperial family in c. 210 AD.

Although citizens of a colonia were also Roman citizens, it is clear that some colonies had attached groups of the indigenous community (incolae) who were not citizens and thus had very much second-class status within the town. This appears to have been the case at Colchester and was a contributory factor in the outbreak of the Boudican revolt.

Once a province was established, other urban communities might petition for honorary promotion to colonia status, as appears to have been the case for London.

The Municipea of Roman Britain

A municipium was also a chartered town and ex-magistrates normally had the right to acquire Roman citizenship. Both coloniae and municipia were obliged to adopt Roman law, which would have had major implications for their populations and for their territories. They were again often inhabited by Roman citizens but the populations were more mixed and in some ways the difference between coloniae and municipia was only a matter of degree.

Verulamium (St Albans) is commonly cited as the only municipium known in Britain, though Eburacum (York) was described as a municipium when Severus died there in 211, it was later promoted to colonia status, before 237 AD. Other towns that may have been municipia are Leicester, Dorchester and Canterbury. It is possible that both York and London may have passed through a stage of being municipia prior to becoming coloniae.

The Civitas of Roman Britain

As in Gaul, the Roman government of the province of Britain was broken down into large administrative areas based on the existing territories of the conquered Celtic tribes. This system made use of the established communication links between these tribes and has the fortunate side-effect of preserving the ancient Celtic tribal boundaries, which has substantially helped in our understanding of the inter-tribal relationships in pre-Roman Britain. These administrative sub-divisions of Roman provincial government are known as civitates.

The civitas centre is generally understood to have been the designated chief town of a distinct people. In the Mediterranean world, these were often geographical more than ethnic distinctions and centred on long-established urban centres, some of them historically city-states. In north-western Europe, the civitates were identified by Rome from the plethora of ‘tribal’ and regional groupings encountered. Although of lower status than the chartered towns, they fulfilled similar functions of local government and were allowed to apply local customary law or local constitutions where such things existed. Across the empire, there was a general pattern over time for the more successful of such civitas towns to be promoted to either municipium or colonia status. It is believed that sixteen British civitates were formally constituted around towns, including St Albans (promoted to a municipium) and a third-century creation at Carlisle. A further three sites have been suggested as other late additions to the list of civitas centres – Corbridge, Water Newton, Ilchester – though evidence is far from certain in each case.

The British civitates, each with their single administrative centre, were comparatively widely separated from each other, giving Britain a low overall density of major towns.

Based on analogy with other provinces such as Gaul, the civitates in Roman Britain were probably subdivided into small rural districts known as pagi, which were centred on other towns and major settlements within each tribal canton. These settlements were politically answerable to the local civitas capital. An example is given on a writing tablet from London, referring to the disputed ownership of a wood called Verucionun wood located in the pagus Dibussu in the civitas of the Cantiaci’ [modern Kent].

Most of our information regarding the place-names of Roman Britain has come from five main written sources, three of which contain the names of British Civitas capitals: the Antonine Itinerary, the Ravenna Cosmography and the Peutinger Table. These ancient documents list the names of cantonal capitals with tribal suffixes appended, such as Calleva Atrebatum. In this manner, eleven Romano-British towns are confirmed as civitas capitals in one or more of these documents:

The above list omits several Romano-British towns which are now known to have been tribal administative centres:

The fact that these known cantonal capitals are not listed as such in the major sources proves that these documents are not complete lists of the Roman settlements of Britain, only those that lay along well-established military highways and the primary trade-routes.

Another important ancient source is that of Ptolemy the geographer and astronomer, from whom we learn the names of many of the rivers and coastal areas of Britain, as well as the names of several of the smaller British tribes. The Notitia Dignitatum also adds further details to our overall knowledge.

‘Small towns’ is the term that historians use to describe settlements that were generally much smaller than civitas capitals, did not have civic institutions and the streets did not form a regular pattern. Where more grandiose structures existed, these were commonly associated with some special function such as the temple and baths complex at Bath. Some had defences but others seem never to have been provided with them.

The majority of the buildings would be basic domestic or artisanal function, with both circular Iron Age houses and Roman rectangular ones. Most are of the typical strip building, with a narrow end on along the street frontages. Strip buildings often have are combined houses and workshops of artisans.

Small bath-houses and large courtyard buildings, would normally fulfil official functions, such as mansiones used by official travellers. Romano-Celtic temples were among the most commonplace and significant structures within small towns.

There were also sites with a primarily economic function, including mining settlements or pottery production sites, or with a central religious focus.

A canaba was the Latin term for a town that emerged as a civilian settlement (canabae legionis) in the vicinity of a Roman legionary fortress (castrum). The word canabae from the type of four-posted hut (Latin canaba) which was prevalent. They were usually larger than vici. They would have facilities, such as bathhouses, which both soldiers and civilians used. The day-to-day administration of canabae could be in the hands of elected councils and the officials whom they appointed. But there were limits to democracy in the ancient world; the legionary legate exercised ultimate control over all matters. The canabae at Chester provide a good example of how such communities functioned.

Vici were ad hoc provincial civilian settlement that sprang up close to and because of a nearby military fort or state-owned mining operation. Vici had no specific legal status (unlike other settlements) and often developed in order to profit from the presence of Roman troops.  Shopkeepers, craftsmen, itinerant traders, prostitutes and others were eager to meet the needs of the army and could obtain a steady source of income.

Even though it was not permitted for any of the common Roman soldiery to be legally married, plenty of soldiers would marry. It is very probable, therefore, that a substantial proportion of each of these initial settlements would be composed of the soldiers’ dependants.

Early vici had no civic institutions, as they remained under the control of the local commanding officer. Those that attracted significant numbers of Roman citizens were later permitted to form local councils and some, such as the vicus at Eboracum (York), grew into regional centres and even provincial capitals.