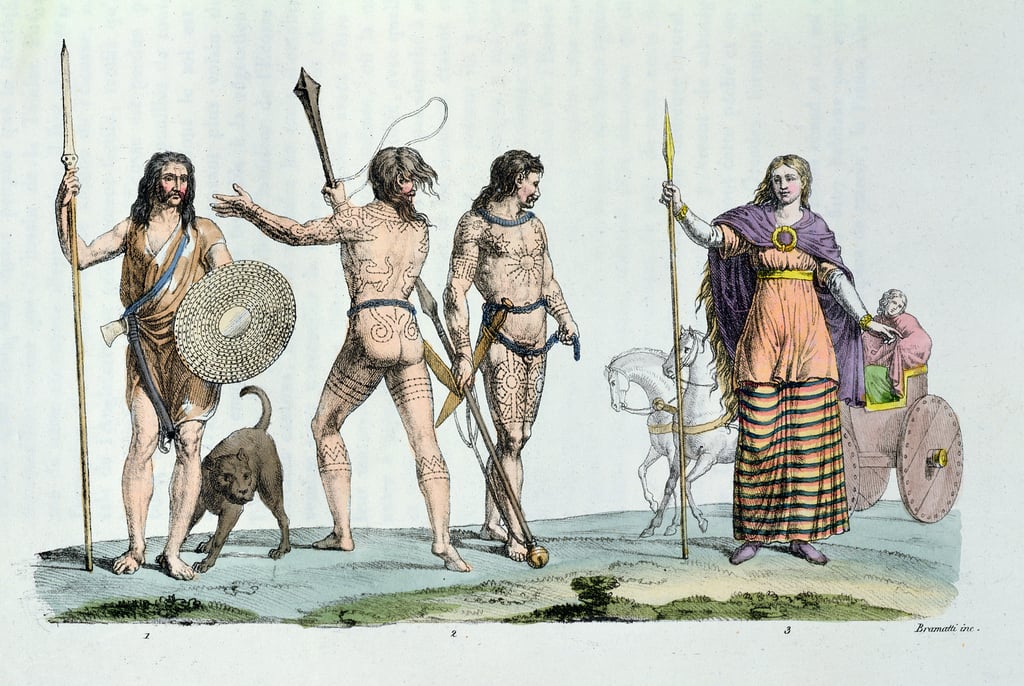 By 275 BC the Celts had settlements stretching from Ireland to Turkey. They used their metalworking skills to build extensive trade networks with ancient Greece and Rome.  The Celts viewed themselves in that period as an, identifiable separate, ethnically similar people speaking related Celtic languages. Sculptures carved at the time and found in many parts of Europe project a similar image of themselves over a significant geographical spread.

The earliest literary references to the ‘Celtic’

Few primary sources exist to educate historians about the ancient Celts, aside from a few inscriptions, they did not fully develop a writing system.  Thus we must rely on the writings of the Greeks and Romans, which are filtered through their biased perceptions

Hecataeus of Miletus, was an an Ionian enthnographer and mythographer. Two works by Hecateus are known: Periodos ges (Journey round the Earth) and Genealogiai (Historia). However, they only survive in fragments through extracts written down by later authors. Below we have the Europa section of Hecataeus’ Periegesis – which had been copied by Stephen of Byzantium in 5th century AD (i.e. 100 years later).

Narbon is the old name of modern Narbonne, and Massalia is that of Marseille. These statements indicate that people called ‘Celtic’ were inhabiting southern France at least in this period. The Greek outpost of Massalia was founded in c600 BC by colonists from Phocaea in Ionia. Ligures were a collection of ancient peoples who inhabited the northwestern Mediterranean coast from the mouth of the Ebro River in Spain to the mouth of the Arno River in Italy. Hecataeus gave them a name—Keltoi, translated into Latin by the Romans as Celtae.

Herodotus was born in Halicarnassus in the early 5th century BC and died before 420 BC. In History, he says that ‘Celtic’ people lived in the vast area from Balkan to Iberia.

2.33: For the Ister flows from the land of the Celts and the city of Pyrene through the very middle of Europe. The Celts live beyond the Pillars of Hercules and the border of the Cynesii, who are the westernmost inhabitants of Europe.

4.49: For the Ister (Danube) flows through all of Europe, rising among the Celts who are the westernmost inhabitants of Europe, except for the Cynetes.

The ancient Greeks called the promontory of the Strait of Gibraltar the ‘Pillars of Hercules’. The Ister is the Greek name for the Danube. So Herodotus has described the Celts living at the source of the Danube River or beyond the Straits of Gibraltar.

In the 4th century BC, Ephorus of Cyme (c. 405–330 BC), a Greek historian and geographer, divided the known world into four sections, placing the four primary ‘barbarian’ peoples, Celts (west), Scythians (north), Indians (east), and Ethiopians (south), into a four-part parallelogram.

Ephorus also relates the ancient notion concerning Ethiopi in his book On Europe. He says that if the heavens and earth are divided into four parts, the Indians will occupy the land of the east wind, the Ethiopians the regions from which the south wind blows, the Celts the west, and the Scythians the land of the north wind.

Later writers also also describe the area beside the Rhone as the territory of Ligures and Celts.

Pytheas was a Greek geographer, explorer and astronomer from the Greek colony of Massalia. He made a voyage of exploration to northwestern Europe in about 325 BC, but his account of it, known widely in Antiquity, has not survived and is now known only through the writings of others.

But Pytheas tells us that the island [of Britain] is more than 20,000 stadia in length, and that Kent is some days’ sail from France.

Apollonius of Rhodes (First half of 3rd century BC)

Apollonius Rhodius in the third century has the Argonauts sailing down the Rhone to the Mediterranean.

And after a long while they came to the beach of the surging sea by the devising of Hera, passing unharmed through countless tribes of the Celts and Ligyans.

And from Rhodanus they entered stormy lakes, which spread throughout the Celtic mainland of wondrous size;

These lakes were possibly the lakes of Northern Italy or Switzerland.

And far on sped Argo under sail, and entered deep into the stream of Eridanus; where once, smitten on the breast by the blazing bolt, Phaethon half-consumed fell from the chariot of Helios into the opening of that deep lake; and even now it belcheth up heavy steam clouds from the smouldering wound. And no bird spreading its light wings can cross that water; but in mid-course it plunges into the flame, fluttering. And all around the maidens, the daughters of Helios, enclosed in tall poplars, wretchedly wail a piteous plaint; and from their eyes they shed on the ground bright drops of amber. These are dried by the sun upon the sand; but whenever the waters of the dark lake flow over the strand before the blast of the wailing wind, then they roll on in a mass into Eridanus with swelling tide. But the Celts have attached this story to them, that these are the tears of Leto’s son, Apollo, that are borne along by the eddies, the countless tears that he shed aforetime when he came to the sacred race of the Hyperboreans and left shining heaven at the chiding of his father, being in wrath concerning his son whom divine Coronis bare in bright Lacereia at the mouth of Amyrus.

The river Eridanus is thought to be the River Po in northern Italy. According to Apollonius the Clets claim that drops of Amber in a lake or march by the Eridanus are tears shed by Apollo.

Where did the Celts come from?

The question of where the Celts came from has been the subject of much debate and research over recent years. There are a number of theories.

Many Historians agree that the origins of Celtic culture can be traced back to three, closely-related, and overlapping cultural groups.

The Urnfield-Hallstatt theory is that the origins of the Celts lie with the Hallstatt culture of the Alps. From there Celts spread across Europe, living in areas including France, Italy, Germany, Poland, Spain, and Britain and a series of waves.

The first of these is the Late Bronze Age Urnfield culture present around the upper Danube from c. 1300 BCE. The name of this culture derives from the common practice of interring the cremated remains of the deceased in urns and burying them.

The Urnfield culture is sometimes broken down into two periods called Hallstatt A–B. HaA (1200-1050 BC) where people were cremated and buried in simple graves and HaB (1050-800 BC) where (barrow or kurgan) burial becomes common, and cremation predominates.

The Hallstatt culture is named for its type site (in archaeology, a type site is a site that is used to define a particular archaeological culture). In this instance historians were drawn to the town of Hallstatt to study an ancient cemetery that lies alongside it. The burial sites were first discovered in 1846 by mining engineer Johann Georg Ramsauer, who went on to uncover over 900 burials. Finds at Hallstatt extend from about 1200 BC until around 500 BC.

The Hallstatt culture is also broken down into two groups. HaC is characterized by the first appearance of iron swords mixed amongst the bronze ones. For the final phase, HaD, daggers, almost to the exclusion of swords, are found in western zone graves ranging from c. 600–500 BC.

Because the burials dated to roughly the time when Celts are mentioned near the Danube by Herodotus, it was concluded that the graves were Celtic and Heuneburg is the polis of Pyrene.

At the beginning of the Hallstatt period in the Late Bronze Age, peoples from the Hallstatt zone were thought to have migrated west and spread Celtic language and customs.

There was clearly a spread of the Celts south and east with a migration of Celts from about 400 BC from the area north of the Alps into the Po Valley, moving downwards to the south. From France, they moved southwest into Spain, mingling with the Iberian tribes to form the Celtiberian people.

They crossed the Channel to establish themselves as the dominant group in the British Isles. Some groups migrated southwards to settle the Po valley of northern Italy. From there they raided down into the Italian peninsula (famously sacking Rome) Britain, northern Spain, northern Italy, Austria and parts of central in the early 4th century BCE. Yet another group moved further south east into the Balkans, and in 279BC they were known to have looted Delphi, the sacred Greek site. Strabo (Geographer) recorded a meeting between the Celts and Alexander the Great in 335BC in the Balkans. They then crossed over into Asia Minor and, defeated by local kings there, settled down to form the kingdom of Galatia.

Celtic from the West Theory

Other historians, however, point to the existence of Celtic place-names across Europe that date to before the Hallstatt period; they argue that the process may have happened in reverse. Communities in western Iberia, France, and British Isles—linked by sea routes—were the first Celtic speakers. Using trade (rather than migrating), they spread Celtic customs and language to central Europe, which would later develop into the Hallstatt culture. Complicating the picture further, this process then took a return route: Once the Hallstatt culture had become established, around 900 B.C., its customs spread westward again to places that were already associated with Celtic customs and language, such as western Iberia.

By 275 BC the Celts had settlements stretching from Ireland to Turkey. Who were they and where did they come from?