Brecon Gaer is a large Roman auxiliary fort located around 4.5km to the west of Brecon, called Cicucium or Cicvcivm (Y Gaer). The fort lies on a spit of land overlooking the confluence of the Afon Ysgir with the Afon Usk, which flowed past the fort on the east. The Roman roads from Clifford in the north-east and Pen y Gaer, Margham in the south-east, met about 155 yards (c.142 m) outside the fort’s northern gateway and forded the Afon Ysgir about 150 yards (c.137 m) outside the western gateway; the hollow way between the road junction and the river crossing may still be traced. Beyond the Ysgir the road again forked, heading towards the auxiliary forts at Y Pigwn in the north-west and Coelbren in the south-west. The fort measures 204m by 154m enclosing an area of 3.14ha, making it amongst the largest forts in Wales.

In 2013, a fort of 1st-century date was identified at Cefn Brynich on the opposite side of Brecon, about 7km to the east-south-east, and it is assumed that this was a predecessor to Brecon Gaer.

In the early years of the second century, the original rampart was raised in and faced with a stone wall, the west and south gateways and the principal buildings were rebuilt in stone, and corner turrets of stone were added to the defences. … The work of the builders, however, was never finished. The space left in the plan for the usual second granary remained unoccupied… again, neither in the praetentura nor in the retentura were the barrack-blocks ever replaced in stone.” (Wheeler)

The earliest timber fort (probably Neronian?) was burned to the ground and later replaced by another timber fort during the Flavian period. Trajanic and Hadrianic samian ware shows occupation throughout this later period.

The wooden fort was replaced with stone during late-Hadrianic/early-Antonine times proves the continued importance the Roman military placed on this location.

The rampart, raised to a height of 3m, was faced in stone, there were four corner towers, and it can be assumed that the four gates were all stone-built, though only three are now accessible, the north gate lying beneath a modern farm range. The special treatment afforded the west gate with its projecting twin guard towers, a feature absent on the south and east, should be noted, although all had double carriageways. Probably though not certainly, the principia and the praetorium were rebuilt in stone at this time.

The Severan campaigns saw the rebuilding of the interior of the fort with a new well being sunk next to the granaries and a bath-house built within the defences, which indicates a reduction in the garrison. Further interior alterations and repairs to the rampart wall were carried out around 367AD, and the latest coin from the site is of Gratian (Imp. 367-383).

What did the stone fort at Brecon look like?

Brecon Gaer was, like most Roman forts, rectangular in shape with an entrance in the middle of each side. A substantial part of the rampart wall survives on the north side up to a height of about 3 metres. The insertion of heavier, more crudely shaped stone shows where it was repaired in the 4th century. Beyond the wall the fort was protected by a ditch up to 9 metres wide and nearly one metre deep.

The footings of the gates and guard-lodges survive complete with the pivot-holes in the sills in which the wooden gate revolved. At each corner was a turret built against the rear of the wall.

Inside the fort remains of the principal buildings have been excavated including the principia and praetorium. The latter was the living quarters of the commanding officer while the principia was the headquarters of the legion where the eagle standards were stored alongside the legionary shrine. This building contained a small cellar where the valuables of the legion would have been kept. The central courtyard contained a hearth and a well. Another important building was the stone granary which lay to the north of the principia. The original bath-house was probably built outside the fort but a later one was built in the north-west corner of the fort. This contained four hot or warm rooms, several unheated rooms and a cold plunge. The barracks occupied most of the area east of the principa and praetorium.

Classical References to the Roman fort at Brecon Gaer

The sole reference for the Roman name of the Brecon Gaer fort is the Ravenna Cosmology of the seventh century. In this document the name Cicutio (R&C#56) occurs between the entries for Alabum (Llandovery, Dyfed) and Magnis (Kenchester, Hereford & Worcester). The generally accepted form of the name is Cicucium, the meaning of which is unclear.

The Garrison Units of the Roman fort at Brecon Gaer

We know that at the time of the original fort AD 75  the troops at brecon included Ala Hispanorum Vettonum civium Romanorum from Spain. The tombstone of a young cavalryman, Candidus, has been found a mile north of the fort and is now in the Brecknock Museum, Brecon.

To the spirits of the departed (and) of Candidus, son of […]nus, trooper of the Cavalry Regiment of Vettonian Spaniards, Roman citizens, of the troop of Clemens, from … aged 20, of 3 years’ service ..

To the spirits of the departed (and) of Valerius Primus, son of …, trooper of the cavalry regiment …, optio his heir had this set up.

An optio was an under-officer to a centurion, his second-in-command.

“[Property of] the Second Augustan Legion.”

The military bath-house at Y-Gaer was placed within the northern part of the retentura of the fort, which is fairly unusual, as most bath-houses were situated outside the parent fort’s defences. The stamped tiles recovered during Mortimer Wheeler’s excavations in the mid-1920’s have subsequently been dated c. A.D. 100, and it is reasonable to assume that the bath-house also belongs to this time.

During excavations over the years at Brecon Gaer a number of animal bones have been uncovered, including those of Ox, Sheep, Pig, Red Deer and Roe Deer; the latter two animals very likely being hunted and killed for sport as well as to supplement the soldiers’ diet. In addition, the Cicucium garrison were even treated to such delicacies as Oysters, Mussels, and two types of Edible Snail (Davies).

There are two Roman practice works nearby at Y Gaer (SO0029), and a substantial Roman building at Maesderwen (SO0625). In addition, two Roman milestones were found together 4¾ miles to the south-east of Brecon Gaer at Llanhamlach (SO0827; RIB 2258 & 2259). The texts of both these stones are shown below.

References for the Roman fort at Brecon Gaer

Map References for the Roman fort at Brecon Gaer

Roman Roads near the Roman fort at Brecon Gaer 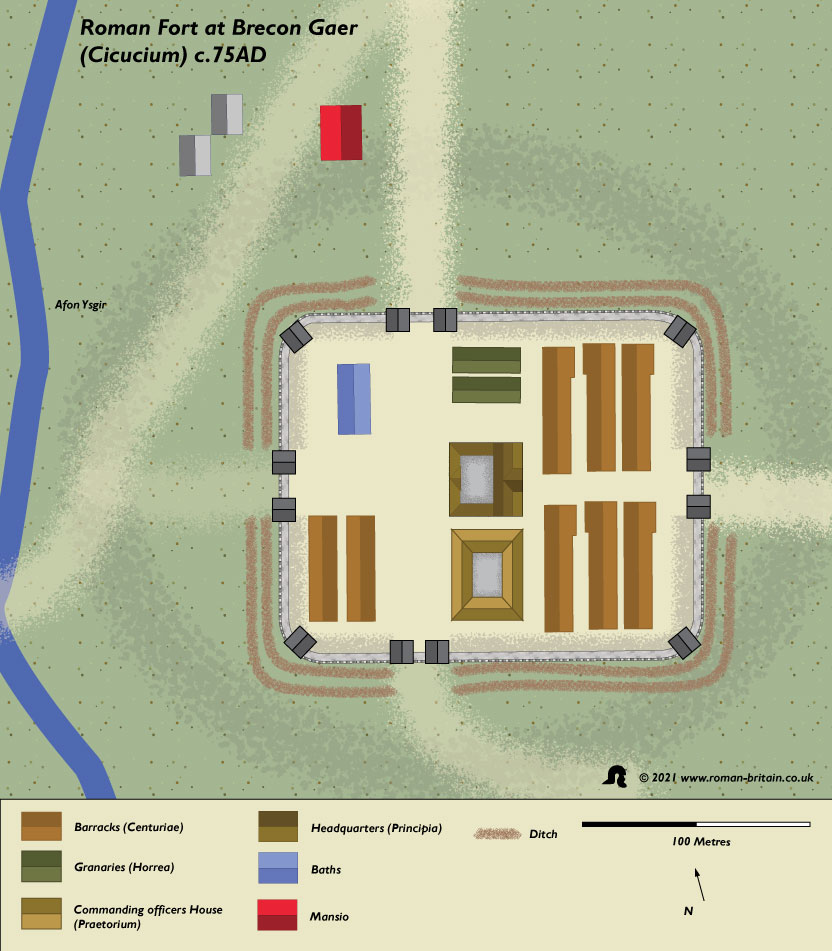