The Temple of Nodens (Templvm Marti Nodentis) at Lydney Park, with its guest house and baths, stood within a promontory fort, reoccupied in the Roman period by a community engaged in mining iron.

The promontory fort was called Camp Hill, and was an Iron Age hillfort defended by high earthwork banks. It was situated on a steep bluff overlooking the Severn Estuary from the north-west. The hillfort is thought to have been created around 100 BC.

Lydney Park was excavated by R.E.M. Wheeler in the 1920’s, who thought that the shrine was constructed sometime after 364AD although the site was occupied c.250 by the huts of the workers from the nearby iron-mines. New excavations in the 1980’s indicated that the majority of the buildings at Lydney date from the late third or early forth century, rather than the late fourth century.

What did the Temple of Nodens at Lydney Park look like?

The temple itself is rectangular in outline measuring 80 x 60 feet with additional heavy, angular buttresses containing a number of niches on their interior sides – presumably for statues – and an entrance via a short flight of steps on the south-east. The cella measures 32½ x 55 feet overall with its extreme north-west end divided into three separate 7 ft. deep rooms, probably indicating a tripartite god, with each room dedicated to a different aspect of the triad. The temple of Nodens emulates the format of a normal Romano-British shrine, although in a somewhat monumental style, using a rectangular plan instead of the usual square and providing for three separate shrines instead of the normal single cella. The temple was probably provided with a clerestory in the upper part of the cella and thus resembled its typical Romano-British counterpart (Type Ie, possibly IIe). 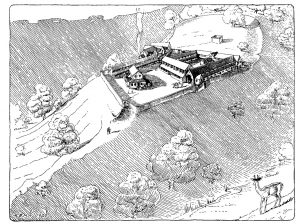 Romano-British temples were typically square and based on a basilica plan. The Lydney Park temple is quite different. It is rectangular and very unusually, it has two side chapels. The odd layout was likely influenced by the popularity of mystical cults in the 3rd and 4th centuries, which, in turn, influenced early Christian church layout. The Lydney Park temple has been interpreted as an expression of ‘one of the early lost rivals to Christianity’.

What artefacts were found at the Temple of Nodens at Lydney Park?

Why do we think Lydney Park Temple was the centre of a Healing Cult?

Nine representations of dogs in stone or bronze, a bronze plaque of a woman, a bronze arm, an oculist’s stamp, 320-odd pins and nearly 300 bracelets quite definitely indicate a healing cult.” (Lewis, p.89)

One of the artefacts found during excavations on the site was The Lydney Dog which  is an impressive piece of Romano-British sculpture created in cast bronze and has since become the symbol of the Estate. 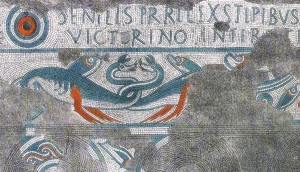 To the god Nodens, Titus Flavius Senilis, praepositus reloqiatopmo (officer in charge of the supply depot of the fleet), laid this pavement out of money offerings; the work being in charge of Victorinus, Victorious, interpreter (interpreter of dreams) on the Governor’s staff.

The existence of this mosaic lead Michael Gordon Fulford to argue that Lydney may have been a navy supply depot.

Another artefact found in Nodens’ temple was a bronze plaque from a priest’s ceremonial headdress. Nodens rides from the deep on a chariot pulled by four water-horses. He wears a crown, carries a sceptre in his right hand, and a sea-serpent is looped around his left arm. Flanking him are two winged wind-spirits and two icthyocentaurs, ‘fish-centaurs’ or ‘centaur tritons’, with heads and chests of men, front hooves of horses, and tails of fish. They carry hammers and anchors. Beneath is another icthyocentaur with a hammer and chisel and a fisherman with a short tail and gills hooking a fish, which could be a salmon.

All of this imagery is suggestive of the deep: rivers, the sea, and the depths of the dreamworld/underworld where prehistory gives birth to myth and the boundaries between species break down. 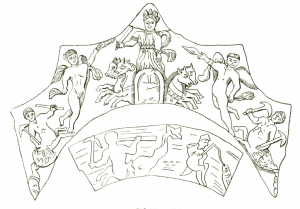 Other finds at Lydney

The small finds are numerous indeed. Over 8,000 coins … prove a very rich occupation extending certainly into the fifth century.

Who was the Temple at Lydney Park dedicated to?

Nodens is a Celtic deity associated with the sea, hunting, and healing, chiefly worshipped in ancient Britain. The temple was occupied in the late Roman period, and is unusual in that it operated as a pagan site at a time when the official religion of Rome was Christianity. A recent re-evaluation of the site suggests that it was a popular place for pilgrimage as early as the second century.

Anglo-Saxon scholar JRR Tolkien was called in by Lord Bledisloe, owner of Lydney Park Estate, to investigate the temple and its connection with Nodens. Tolkien, of course, is best known for his Lord of the Rings books, which were almost certainly influenced heavily by his research on Lord Bledisloe’s behalf. Tolkien found that the god Nodens developed from the Celtic god ‘Nodens the Catcher‘, who had a magical hand. Nodens evolved in Irish legend as Nuada (‘of the silver hand’) and in Welsh folklore as Lludd Llaw Ereint, the inspiration for Shakespeare’s King Lear.

The Monumental Inscriptions at Temple of Nodens at Lydney Park

There were four inscriptions found at Lydney Park temple. Two were dedications to the God Mars / Nodons

To the god Nodens: Silvianus has lost his ring and given half (its value) to Nodens. Among those who are called Senicianus do not allow health until he brings it to the temple of Nodens. (This curse) comes into force again.
DEVO NODENTI SILVIANVS ANILVM PERDEDIT DEMEDIAM PARTEM DONAVIT NODENTI INTER QVIBVS NOMEN SENICIANI NOLLIS PETMITTAS SANITA TEM DONEC PERFERA VSQVE TEMPLVM […] DENTIS
The name Senicianus was found inscribed on a gold ring found at Silchester (The Silchester gold ring is now RIB 2422.14. ). This may refer to the same ring however the name Senicianus is common in Celtic-speaking provinces, and a coincidence with Lydney is unlikely.

The last were forty-seven letters, or fragments of letters, cut out of thin sheet-bronze and pierced with nail-holes for fixing to wood. No doubt visitors could buy such letters locally in order to put up a votive inscription.

No doubt visitors could buy such letters locally in order to put up a votive inscription. Similar letters have been found on Roman sites on the German limes, e.g. at PfÃ¼nz and Schierenhof (ORL Lief. 14 Taf. XIV; Lief. 7 Taf. II).

References for the Temple of Nodens at Lydney Park

Roman Roads near the Temple of Nodens at Lydney Park