On the edge of Ravenglass stand the remains of a Roman bathhouse associated with the fort of Glannaventa across the lane. Though there is little to see of the fort, plenty of the bathhouse remains to explore. The walls stand to over 12 feet in height, making the bathhouse one of the tallest surviving Roman sites in northern England. The bath house is thought to date to the period between the 2nd and 4th centuries AD. The fort was established in about AD 130 to guard the important harbour at Ravenglass. The Roman Bath House is sometimes known as Walls Castle.

What can you see at Ravenglass Bathhouse

The only visible Roman wall structures are those of the row-type bathhouse, built around 130 AD, known as “Walls Castle”. The thermal bath is located between the northeast corner of the fortress and the Roman civil settlement, originally it probably covered an area of ​​27 × 12 meters and resembled the bath of the fort in Chesters . Buried under the ground are the foundations of the east wing, which are only visible today as a rise in the ground, but which make the former size of the building evident. Until the remains of the hypocaust heater were found, it was considered a villa rustica. The ruin is one of the best preserved ancient building structures in England.

The bathroom consisted of several rooms that were arranged in a double row from east to west. In the entrance and changing areas ( apodyterium / gymnasium ), several niches ( cubiles ) were set into the walls , perhaps to store the clothes of the bathers. The function of the rest of the rooms is not exactly known, they almost certainly served as a sweat bath ( sudatorium ), warm or hot bath ( caldarium ) and cold bath ( frigidarium ). On the north and south walls there were supporting pillars that were supposed to carry the weight of a stone or brick vault. It was supposed to shield the wooden roof structure from the hot, humid air. The walls of the west wing have been partially preserved up to a height of 3.7 meters. The walls and door arches are made of hewn sandstones connected with mortar. At least two of the rooms could be heated by hypocausts. At one of the door openings, a heavily worn threshold and a wide groove in the wall can still be seen, in which the wooden door frame was once attached. Some window openings can still be seen. 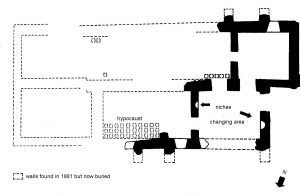 The interior walls were originally plastered with pink plaster. After the last excavations were completed, the eastern foundations were filled in again. In 1881 u. a. the remains of the hypocaust heater were exposed, after which they were also filled in again. During the excavations, shards of window glass, bones, tiles and bricks and ceramic fragments were found. There is evidence that the bath was supplied with fresh water from a slightly higher spring in the east of the fort.

Ravenglass Bathhouse in the Middle Ages

The building was probably used by the residents of Muncaster Castle as a residence or similar until the Middle Ages. used, probably one of the reasons why it is still so well preserved. According to eyewitness reports, the roof was still there until around 200 years ago, before much of the building was destroyed by stone robbery. Since it is located outside the walls of the Roman fortress ( extra muros ), some researchers assume that it was visited not only by the soldiers but also by the civilian population. A detailed survey and find analysis was carried out in May 1983 on behalf of the British Environment Ministry. The walls were then preserved and placed under protection. The ruin is now under the care of the English Heritage.