Ravenglass Roman Fort was a naval base overlooking a natural harbour formed by the confluence of three rivers. It played a key logistical role supplying Roman forts across the region particularly those on the Cumbrian coast and in the western sector of Hadrian’s Wall. The remains include a portion of the bath house, one of the tallest surviving Roman structures in northern Britain.

The convergence of three rivers, the Irt, the Mite and the Esk, has formed a natural harbour at Ravenglass, which became a strategic port for imports and exports in Roman Britain.  Around AD 122, concurrently with the construction of Hadrian’s Wall, the Romans built a small earth and timber fortlet on the site.

Around AD 130, the fortlet was demolished replaced with a large fort here, known as Glennaventa, which supplied goods and troops during the building of Hadrian’s Wall further north, and there is evidence of occupation for over 300 years.  The fort occupied a flat plain around ten metres above high water level and was directly adjacent to the river. The precise configuration remains elusive due to partial destruction of the site from coastal erosion and construction of the railway. However, the layout seems to have been typical of forts of the period and would have had a headquarters building in the centre surrounded by barracks, workshops, granaries and a Commanding Officer’s house.

The layout conforms to that of a typical auxiliary cohort fort with a middle rangeof administrative buildings and (mostly) barrack blocks at the west and east ends. In the middle range, there are traces of a central building, normally the position of the principia (headquarters building). There are traces of buildings to either side of the central building, one of which is presumably the praetorium (commanders residence). The other building could have been granaries, a workshop, hospital or a combination of these (Campbell 2009, 32-4). The east side of the central building is represented by two concentric curved anomalies, which could equally be the eastern defences of the preceding fortlet. If it is the east side of the fortlet, it offers a measurement of about60m for one axis, putting it in the larger fortlet category rather than a smaller barrack fortlet or a watch tower (Walker 1989, 95 – 7). The buildings in the range at the east end of the fort appear to be four large barrack blocks parallel to the via principalis. Their size suggests they accommodated four turmae of cavalry (a total of 128 men with their horses). Assuming the infantry barrack blocks were at the west end of the fort, it is likely that the garrison was a part – mounted equitata cohort for a time at least (Webster 1969, 149).

There was a gateway on the east, through which the road to Ambleside via Hardknott ran, and there were probably additional gateways on the other three sides. A large ditch, partly forged from a natural gully, protected the northern, eastern and southern sides. A natural gully provided additional protection to the south and was probably the fresh water source for the fort. The defences on the seaward side have been lost to coastal erosion. A large civilian settlement became established to the north of the fort, the size perhaps reflecting the existence of a trading community at the site.

Hadrian’s Wall was abandoned around AD 138 as the Romans moved back into Scotland and established the Antonine Wall on the Clyde/Forth isthmus. The new frontier was short-lived and around AD 160 Hadrian’s Wall was re-commissioned although the western coast defences were not renewed at this time, presumably due to a changed military situation. However, Ravenglass remained in use as both its naval function and role in mining activity continued. 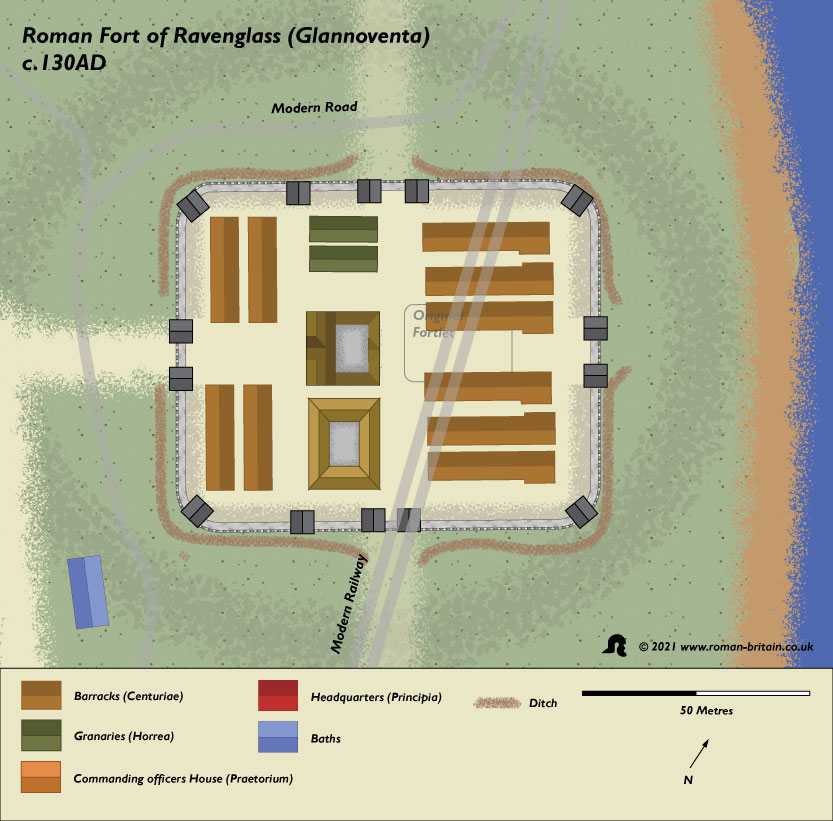