The Roman Fort at Hardknott Pass is definitely one of the most strikingly sited forts in Britain, perched high upon a rocky spur at an altitude of 800 feet, on the western side of Hardknot Pass overlooking the River Esk.

Hardknott Roman Fort, also known as Mediobogdum in the Ravenna Cosmography was built to defend the road from Ravenglas on the coast to Ambleside and serve as a secure stopping place before passing over Hardknott pass. Hardknott Fort dates from around the 2nd century AD, during the reign of Hadrian.  Strategically the site is nothing but a link in a chain of roadside forts. From the fort you can see up to the summit of Hardknot pass and you can also look down towards Eskdale and the sea. While Ravenglass is not in sight a single signal tower could maintain a visual signal system connecting the two – a likely site would be the nearby Muncaster Castle which stands on an elevated platform. The fort may have also been built to control mining for lead and silver in the mountains of the Lake District.

Pottery evidence suggests that the fort was abandoned in the mid 2nd Century, possibly following the construction of the Antonine Wall, but this may have occurred as early as the AD130’s, when the Romans pushed the frontier further north into Southern Scotland. It was refortified during the reign of Marcus Aurelius around 160 AD until eventually being abandoned by the very beginning of the 3rd century.

What did the Roman Fort at at Hardknott Pass Look Like? 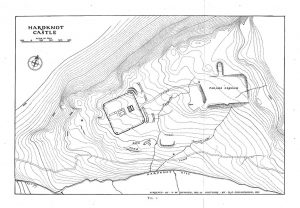 This fort is square in outline with rounded corners measuring 375 ft (114 m) across the ditches, thus covering an area of about 3¼ acres (c.1.3 ha), although the internal dimensions were around 345 ft square (105 m²) within the ramparts, giving an occupation area of a little under 2¾ acres (c.1.1 ha). Two ditches are visible on the weak uphill side.

Gateways and Walls of the Roman Fort at Hardknott

The three acre fort still has substantial walls remaining although these were rebuilt to their maximum height of 2.2 metres in the 1950’s.

None of the gates have guard-rooms, but all except the porta decumana are double; the two archways of the porta praetoria were each about 10 feet wide and those of the portae principales about 8 feet.

The south-eastern gateway is the Main Gateway (Porta Praetoria) of the Roman Fort at Hardknott Pass, and the road running through it – the Via Praetoria – led straight to the headquarters building.  The gate had double portals and was originally built using red sandstone. A guardhouse may have been positioned above the gateways, reached from the wall-walk which ran around the inside of the parapet.

Corner Towers of the Roman Fort at Hardknott

The fort is square with a small square tower at each of its corners. These would have projected above the wall and allowed good views along the adjacent sides of the fort as well as of the surrounding countryside. No doorways into the tower occur within the fort at ground level so we may assume that access was from the wall-walk which ran around the top of the wall.

Headquarters Building (Principia) of the Roman Fort at Hardknott

This was the most important building within the fort and occupied a central position at the junction of the two main roads. Its south-eastern entrance gave access to a small open courtyard surrounded by a veranda. Beyond this lay a hall running the full width of the building.

Towards the north-eastern end of the hall a short projecting wall represents the remains of a tribunal, a platform from which the Commanding Officer would have given orders for the day and officiated over ceremonial occasions. Immediately north-west of this hall was a range of three rooms, the outer two of which were probably the pay and records offices. Between these was the aedes (temple) where the garrison’s standards, images of the reigning emperor and perhaps an altar were housed.

The Commanding Officers House (Praetoriom) of the Roman Fort at Hardknott 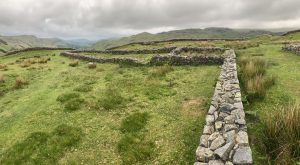 Commanding officers were drawn from the upper levels of society. Some may have been accompanied by their families and all would have been expected to accommodate visiting officials. To reflect the officers’ status and circumstances spacious higher quality housing was necessary.

The commanding officers house was probably large and single storied, probably with rooms arranged around a central open courtyard – a design based on Roman Town houses. Here only one range of rooms and the outer wall of a second survive.

In contrast the soldiers would have had basic accommodation in timber barracks, elsewhere within the fort.

Bathhouse of the Roman Fort at Hardknott

Roman forts were usually provided with bath houses, but how often the soldiers might use the facility is not known.  Sweating in the hot rooms allowed dirt to come to the surface of the skin from where it could be scraped off, then a cold plunge closed the pores. Bath houses were normally located outside the fort. 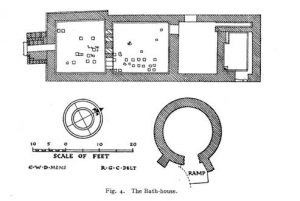 The main range of the bath house consists of three adjoining rooms, figidarium (the cold room), tepiadarium (the warm room) and calarium (the hot room). The laconicum (the circular building close by) was a type of sauna.

Heat was provided by two furnaces located to the south-west of the cadarium and to the east of the laconicum. The passage on the east side of the loconicum is actually the flue connecting it to its furnace.

The Granaries of the Roman Fort at Hardknott

All forts were provided with granaries or Horrea to store the grain which formed the main part of the soldiers diet – although this was supplemented with a wide range of meat, vegetables, fruit and beer.  Here there are two granary buildings, both with access from the Via Principalis or main street. These buildings had long thick outer walls which were heavily buttressed, presumably to support the weight of their superstructure and slate roof. The grain was probably stored in sacks or bins and had to be kept dry. This was achieved by providing the buildings with raised wooden floors, supported on rows of piers which you can still see, to allow good ventilation.

The Parade Ground of the Roman Fort at Hardknott

Upslope from the fort lies the a large (1.2ha) level parade ground, which in an impressive feat of engineering, was levelled out of a boggy hillside. It would have been accessed from the north east gate. Soldiers would have exercised and practised drill manoeuvres here. This is the finest surviving example or a parade ground in the Western Empire. It was known locally as the ‘Bowling Green’ in the 19th Century.

In the middle of the north side can be seen a long ramp leading to what has in the past, been described since Collingwood as a ‘Tribunal’ for the officer to review training and parades. Recent comparisons at Tomen-y-Mur, together with the Irton and Sergeant 1792 plan which clearly records a square structure on top of the platform, suggest however that this could have been a podium for a small temple, and the ramp being the foundation for a flight of steps leading up to it.

Paved areas lying immediately outside forts have often been recognised as parade-grounds, as for instance at Slack and Ambleside; elsewhere, a parade-ground lying at a small distance from a fort, and sometimes commanded by a tribunal, is plainly visible, e.g., at Maryport.

A Vicus at Hardknott fort?

Unlike Ambleside and Ravenglass there is no evidence of a vicus here and no Roman cemeteries have been found.

... Agricola ..
[...  ]GRIC[...]LA COII
The second word may read COH, an abbreviation of Coh[ors] or Coh[ortis], suggesting that the stone perhaps originally included the name of the legionary cohort responsible for building the fort; it may also be read COE, perhaps from Coe[rcitio] 'restraint, punishment'. I have opted for the imperative Coii!. The Agricola in question may have been a centurion, a cohort commander, or even one of two Roman governors of Britain, Gnaeus Julius Agricola (Praeses Britanniarum 78AD - 84) or Sextus Calpurnius Agricola (Pr. Br. 163/4AD - c.166), however, the archaeological evidence does not support either of these latter two options.

The inscription shown above is the earliest – and briefest – of only two texts on stone recovered from Hardknott.

The above inscribed stone is dateable to the reign of Hadrian, and confirms that a certain amount of building work was undertaken by an auxiliary infantry cohort, possibly because they were re-using an earlier structure, and only minor renovation work was required at the time.

Classical References to the Roman Fort at at Hardknott Pass

The only classical reference for the original Roman name of the Hardknott fort is the Ravenna Cosmology (R&C#114) Mediobogdo entry, which is situated in the document as on the ground, between the forts of Galava (Ambleside, Cumbria) and Glannoventa (Ravenglass, Cumbria).

The name Mediobogdo means ‘Fort situated in the middle of the curve’ – a reference to its position in relation the the river Esk.

The Garrison of the Roman Fort at Hardknott Pass (Mediobogdum)

As you would expect for a fort perched in such an inaccessible spot, the garrison of Hardknot was an infantry cohort, this one containing five-hundred auxiliary soldiers recruited from the Delmatian tribes, who inhabited the areas bordering the eastern Adriatic in the modern countries of Croatia, Bosnia-Herzegovina and Montenegro. See The Fourth Cohort of Delmatae.

Map References for the Roman Fort at Hardknott Pass (Mediobogdum)

Roman Roads near the Roman Fort at Hardknott Pass (Mediobogdum)

The Romans originally built a road over the pass in the 2nd century AD to link the coastal fort at Ravenglass with their garrisons at Ambleside and Kendel. The Romans called this road the Tenth Highway and it reaches a height of 393 m (1289 ft) at the top of the Hardknott Pass before descending steeply to the Duddon Valley and then ascending and descending the Wrynose Pass (also 393 m) on its way to Ambleside. The road fell into disrepair after the Romans left Britain in the early part of the 5th century AD, although it remained as an unpaved packhorse route throughout the centuries.

The Ministry of Defence used the area for tank training during the Second World War and this completely destroyed the ancient track. After the War a decision was made to repair the damage and rebuild the road with a tarmac surface to give a direct motor route between Ambleside and Eskdale for the first time. However, the Roman route and the modern road do not generally coincide, the Roman route lying generally to the north of the modern road west of the summit, and to the south on the other side. 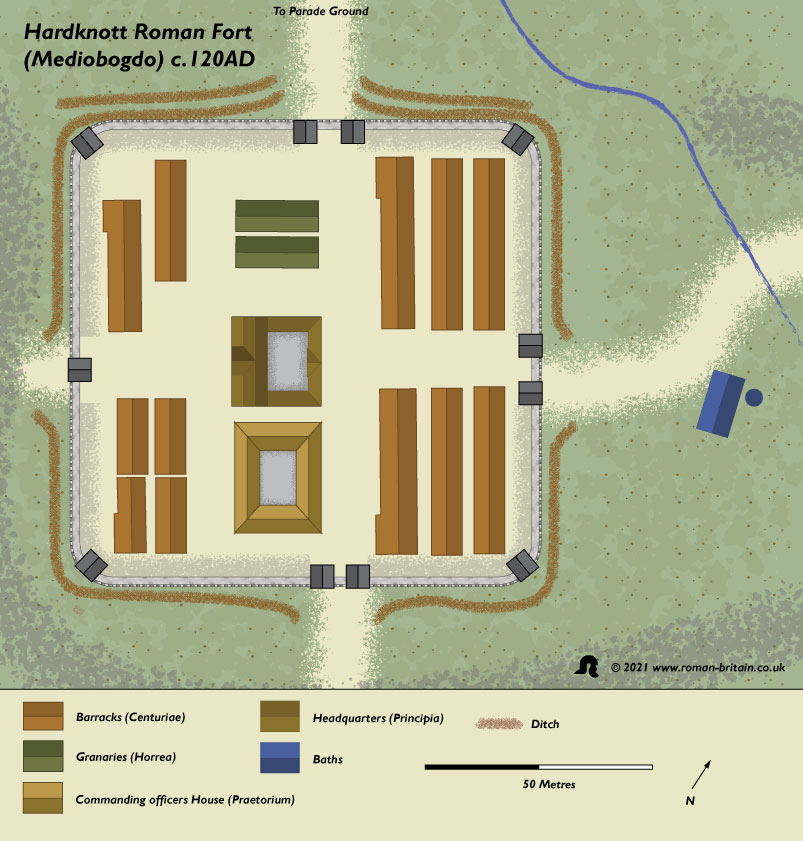