The Roman Fort of Arbeia (South Shields), was originally built during the reign of Hadrian c.129AD.  South Shields was located just four miles beyond the eastern end of Hadrian’s wall of Segedunum (Wallsend) and would have prevented anyone by-passing the wall by simply crossing the River Tyne. The fort also guarded a small seaport on the south bank of the Tyne Estuary near its outlet into the North Sea at South Shields.

Who Built the Roman Fort at Arbeia  (South Shields)?

We know that Arbeia Fort was built by the Sixth Legion (Legio VI Victrix) by the following Roman Inscriptions that were found at the fort.

The Sixth Legion (built this).

The inscription was found in the front wall of the cross-hall of the Headquarters Building of South Shields fort.

Of the Sixth Legion Victrix, the century of Paternus (built this).

Of the Sixth Legion Victrix [Pia Fidelis], the century of […] Severus (built) 102 feet.

Also Referenced as RIB 1070d; Britannia xviii (1987), p.368, no.8
The legion also built the first stone principia (RIB 1061), now dated by excavation to c. 163. 3.  The legion’s secondary cognomina have been erased with a small pick or point, probably the result of casual or wanton damage, since it extends to part of Vic(trix) and the centurion’s name as well. 5–6.  Most ‘centurial’ stones do not specify the length built (pedatura), but other instances are collected in RIB I Index, p. 107. They must have varied according to the total length required and the number of sub-units available, but ‘102 feet’ of fort-wall is comparable with the lengths of 112 feet built by two auxiliary centuries at Carvoran

Of the Sixth Legion Victrix Pia Fidelis, of the Third Cohort, [the century of…(built this)].


Although the inscriptions indicate that the Sixth Legion built the fort of Arbeia, South Shields, it is quite unlikely that a cohort from this unit was ever stationed here. A substantial stone-built fort such as that at Arbeia would have required specialised engineering skills which were only available in the highly-trained soldiers in the Roman legions, and not possessed by the auxiliary units which were to garrison the fort. It was the legions, therefore, who were responsible for most of the military building work in the Roman empire, and it is evident that the Sixth legion were responsible for perhaps all of the building work at Arbeia.

The inscription below, which is an altar to an unknown god, was dedicated by a centurion of the Sixth (vide supra), which suggests that at least one century of the legion was stationed here for some time, most likely in temporary accommodation whilst construction work at the fort was under way.

For the placing of the dedicator’s name at the beginning of the text see RIB 140 (Bath).

Who Garrisoned the Roman Fort at Arbeia (South Shields)?

The first two units stationed here were both auxiliary cavalry ‘wings’, each containing around five-hundred troopers.

The first unit was the Ala Primae Pannoniorum Sabiniana – The First Sabinian Wing of Pannonians, a 500-strong auxiliary cavalry regiment containing five-hundred horsemen recruited from among the Pannonian tribes of modern Hungary. They were removed to Onnum (Halton Chesters, Northumberland) sometime before the third century.

The second unit to be stationed here was another cavalry regiment Ala I Hispanorum Asturum, originally from the Astures tribe of north-western Spain, and probably numbered among the auxilia which accompanied emperor Claudius during the British invasion of 43AD. They are attested in stone on a single tombstone (vide supra).

The original cavalry units were replaced in the Severan period by a one-thousand strong infantry unit  Cohors V Gallorum, who were possibly withdrawn from Fort Cramond on the Forth. The presence of this Gallic infantry unit at South Shields is attested in the following dedicatory inscription dated to 222AD, which celebrates the completion of the new fort aqueduct (vide supra).

The Emperor Caesar Marcus Aurelius Severus Alexander Pius Felix Augustus, grandson of the deified Severus, son of Antoninus the Great, pontifex maximus, with tribunician power, father of his country, consul, brought in this supply of water for the use of the soldiers of the Fifth Cohort of Gauls, under the charge of Marius Valerianus, his propraetorian legate.

While the above is the earliest datable inscription from South Shields which mentions cohors V Gallorum, however its earlier presence is implied by the apparent association of its lead sealings (RIB II.1, 2411.100, 102–105) with Imperial sealings no later than 209 (2411.1–16).

References to Cohors V Gallorum was also found on an altarstone to an unidentified deity (RIB 1059).

… the Fifth Cohort of Gauls ..

It was also mentioned on a the base of a statue of dedicated to Julia Domna, the mother of Caracalla.

[For Julia our Augusta, mother of our Augustus Marcus Aurelius Antoninus] and of the army, [and the senate and] the country, out of its common duty and loyalty, [under the charge of Gaius Julius Marcus, imperial propraetorian legate], the Fifth Cohort of Gauls [erected (this)].

As the normal requirement for a military cohort was ten barrack-blocks, it would appear that the Fifth Cohort of Gauls was under-strength by almost half, perhaps four centuriae had been retained as a caretaking force at the Cramond fort. An alternate theory is that the unit was employed to accompany the supply caravans between the two forts – whether they travelled by road or sea – and quarters had been allocated in both establishments for use by the infantrymen at either end of the journey.

The last Roman military unit attested at South Shields were the Numerus Barcariorum Tigrisiensium, an irregular unit of barge-men from the River Tigris in the Middle-East; the name of the unit is recorded in the Notitia Dignitatum.

It would appear that the wife of one of these men is recorded on a tombstone recovered from South Shields.

To the spirits of the departed (and to) Regina, his freedwoman and wife, a Catuvellaunian by tribe, aged 30, Barates of Palmyra (set this up).
Regina, the freedwoman of Barate, alas.

What did the Roman Fort at Arbeia  (South Shields) look like? 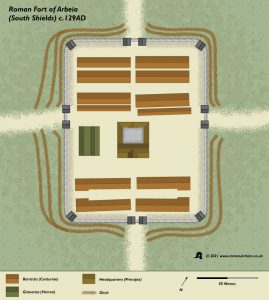 Initially it was built in the traditional ‘playing card’ shape with a headquarters in the centre, flanked by twin granaries and a Commanding Officer’s house with barracks and workshops in the quadrants. 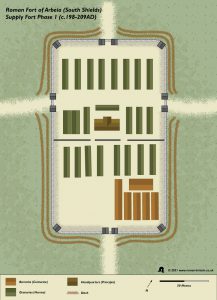 In 208AD the emperor Septimius Severus launched a series of campaigns against the troublesome Caledonian tribes, and the fort at Arbeia underwent a radical change in its usage. The attendant cavalry ala was withdrawn for the emperor’s campaigns through the Scottish highlands, to be replaced at South Shields by an auxiliary infantry cohort. This change in military function was obviously accompanied by a period of rebuilding, during which the fort was considerably altered:

The initial building of the dividing wall between the northern half of the fort  and the southern would indicate that the north would have taken supplies from sea-going vessels, while the southern half acted as a more normal garrison area.

We can date the period that the fort was converted, to between 198 and 209, this is based on small finds found during the excavations of this supply phase. These include lead sealing that bear portraits of the Emperor Septimius Severus and his sons Caracalla and Geta. Therefore the renovation would with be associated with the work of the governor Alfenus Senecio between 205-207 or the campaigns in Scotland led by Severus himself 208-209. 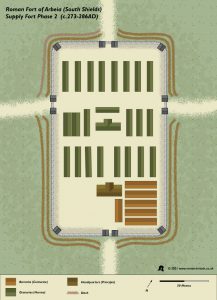 Following a fire about 300, 8 of the surviving granaries were converted to barracks; a new larger headquarters building was built on the same site, and a large commanding officer’s house.

The fort appears to have been temporarily abandoned towards the end of the third century, and not re-used until the end of the fourth, when Arbeia seems again to have been put to use as a storehouse, with its contents being shipped periodically inland along the course of the River Tyne and its tributaries.

The fort was finally abandoned c.400AD, pretty much about the same time as emperor Honorius informed the people of Britain that they must look to their own defence, and the Romans withdrew from the island never to return.

Classical References to the Roman Fort of Arbeia

The earliest reference to the Roman fort at South Shields occcurs in the Notitia Dignitatum of the 4th/5th century, where the garisson fort Arbeia (vide infra) is listed between the entries for Verbeia (Ilkley, West Yorkshire) and an unknown station named Dictium. Arbeia is thought to be a Latinised form of a name originally from Aramaic – the native language of the last attested unit stationed at the fort – meaning ‘the Place of the Arabs’.

The fort at South Shields has been identified with the Horrea Classis entry of the Ravenna Cosmography, which was a list of forts and posting stations compiled for the Severan campaigns of the early third century. This Latin name means ‘The Granaries of the Fleet’, which certainly describes the Arbeia storage depot, and possibly indicates that part at least of the Classis Britannia or the ‘British Fleet’ may have been based here in South Shields. This view is now discredited, however, and Horrea Classis is now thought to refer to the Severan fort at Carpow overlooking the mouth of the Tay in Scotland.

Other References to the Roman Fort of Arbeia

The sixteenth-century antiquary, John Leland, gives the name as Caer Urfa, which appears to be a simple corruption of the earlier Roman name, prefixed by Caer, a Welsh word meaning ‘a fortified place’ which is typical of the early Saxon era. The modern name is first recorded in 1235 as Scheles, which is a Middle English term for a group of makeshift huts or shelters, in this case probably used by fishermen; there were evidently more of these temporary dwellings on the opposite bank of the Tyne at North Shields.

The diet of the soldiers of Arbeia

During excavations over the years at the South Shields fort a number of animal bones have been uncovered, including those of domestic Ox, Sheep, Goat and Pig, also game such as Red Deer, Boar and Elk; the latter animals very likely being hunted and killed for sport and as a means of supplementing the soldiers’ diet. As one might expect from a fort positioned close to the coast, a number of molluscs were also eaten at Arbeia, including Oyster, Mussel, Limpet, Winkle and Edible Snail.

The Gods of Arbeia

Over the years a number of Roman inscriptions have been unearthed in the neighbourhood of the Arbeia fort which, aside from giving valuable dating information and the names of the garrison auxiliary units, also gives some insight into the religious activities of the inhabitants.

To the god Aesculapius Publius Viboleius Secundus gave this altar as a gift.

Sacred to the goddess Brigantia: Congennicus willingly and deservedly fulfilled his vow.

To Mars Alator, Gaius Vinicius Celsus for himself and … willingly and deservedly fulfilled his vow.

To holy … and the Divinities of the Emperors … Domitius Epictetus, … with his fellow-soldiers … this temple.

Sacred to the spirits of the departed: Au[…]dus lived 9 years, 9 months Lucius Arruntius Salvianus (set this up) to his deserving and most devoted son.

To the spirits of the departed (and to) Regina, his freedwoman and wife, a Catuvellaunian by tribe, aged 30, Barates of Palmyra (set this up).
Regina, the freedwoman of Barate, alas.

References for the Roman Fort of Arbeia

Roman Roads near the Roman Fort of Arbeia

Although the supplies for the Wall and for campaigns must have come by sea, they needed to be sent on to Corbridge in the west, however this road has never been found. 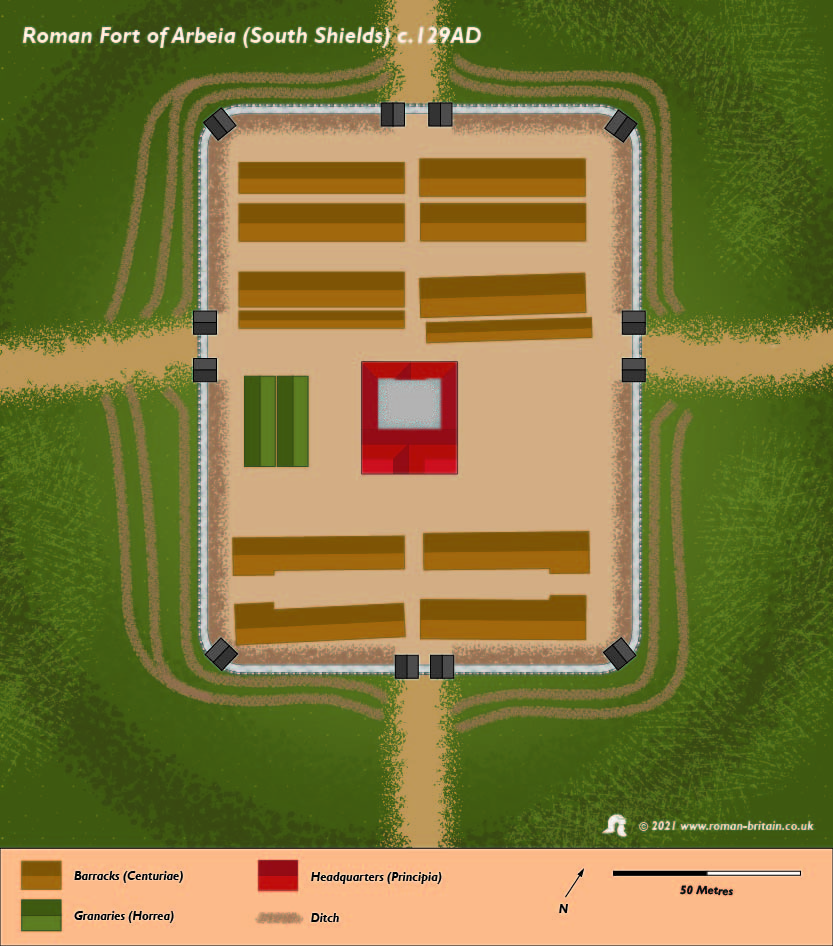