The bathhouse ( balnaeum ) examined by John Clayton (1792–1890) at the end of the 19th century stood in front of the west gate on the grounds of the vicus and consisted of seven rooms. It was a row-type bathroom – often found at Limes forts – with changing room, toilet, tepid, hot and cold bath and was similar in many details to the bathhouses of Benwell, Chesters and Netherby, but was much smaller. The thermal baths were last renovated in the 4th century. Its exact position is unknown today, a rise in the ground still recognizable on the west side of the fort seems to be the most likely location. From there, a paved road discovered in 1977 led to Maggie’s Dene Burn. 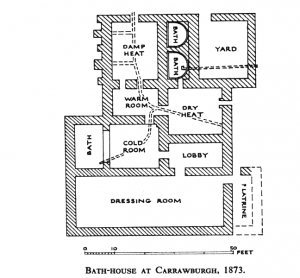