The town of Caerphilly lies in a basin between Caerphilly Mountain to the south and Mynydd Eglwysilan to the north. The north-western corner angle of the Roman Auxiliary Fort at Caerphilly  was discovered by accident in 1963 during excavations conducted by J.M Lewis upon the northern outworks of Caerphilly Castle. A large earthwork constructed during the English Civil War (c. A.D. 1645) lies wholly within the confines of the Roman enclosure and occupies about half of its interior area.

The Roman auxiliary fort occupied much of the area now contained within the circuit of Crescent Road, Nantgarw Road, the western end of North Lake, and the north-western defences of the Norman Castle. The limited investigations conducted in 1963 located the north-western angle and short lengths of the north-west and north-east defences, and the position of the north-eastern angle may be deduced, which gives an east-west dimension of about 360 feet (c.110 m). The remnants of the fort’s south-eastern defences may be retained within an enclosure lying just 130 feet (c.40 m) outside the castle wall. If this is the case, then the north-south dimension of the fort may have been around 350 feet (c.107 m) which would have given an almost square outline with an occupation area of not quite 3 acres (c.1.2 ha).

Its proximity to Cardiff and Gelligaer, and its occupation for at least a hundred years is a measure of the toughness of Silurian resistance. It also possibly reflects the importance to the Roman economy of the lead working 5 miles away at Machen.

The 1963 excavations defined the nature of the Roman defences; they comprised a bank of turf and clay set upon a base of cobblestones about 24 feet wide (c.7.3 m) and fronted by a timber revetment, before this rampart were two V-shaped ditches spaced about 5 feet apart (c.1.5 m), each measuring about 9¼ feet wide and 3 feet deep (c2.8 x 0.9 m); there was no discernible berm between the face of the rampart and the inner ditch. Finds include Samian ware dated c. A.D. 75-100, coarse pottery ranging from early Flavian to late Antonine (c.75-160), fragments of glass bottles dating to the late-1st or early-2nd century, a lead weight and other assorted fragments of lead.

The excavator considered the fort to have been established ca. 75 and occupied at least at least until the middle of the 2nd century.” (Glamorgan Inventory, p.95)

There is a Roman temporary marching camp 6½ miles to the west at Pen-y-Coedcae (ST0687).

The site of the Roman fort in Caerphilly is easy to find  being bounded by Crescent Road to the west, Nantgarw Road to the north, and by North Lake and the castle defences to the east. However most of the fort is inaccessible – either behind the The Grove, Cadw Site, or within a private house. The area of the southwest wall is accessible – but almost nothing is discernible.  However you are also wandering around the rear grounds of Caerphilly Castle – so it is still pleasant.

Caerphilly lies mid-way between the forts of Cardiff and Gelligaer, about 7 miles from each (Fig. 2). It lies at the point where the road from Cardiff to the north is met by a route coming west from the legionary fortress at Caerleon, which would have diverged from the coastal road at Bassaleg. This route must have been used in Roman times, for on it lies the lead mining and smelting site of Machen. 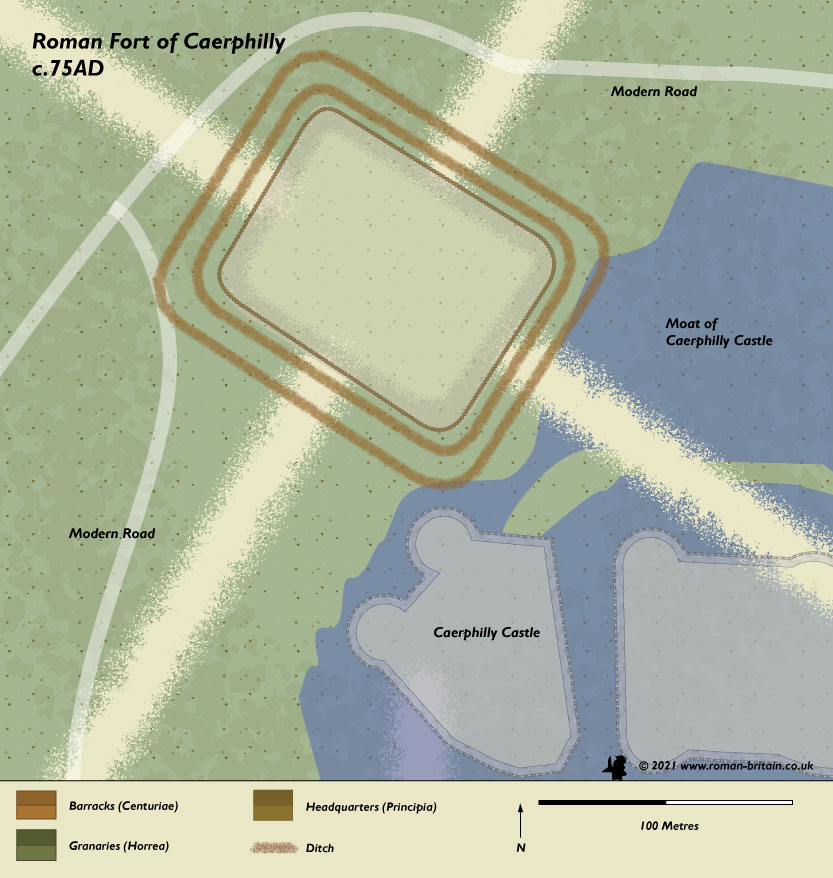