The Gellygaer Earth and Wood Roman Fort was probably established as a result of the Roman conquest in 74–78. Its purpose was to police the upland area of the road between Cardiff Roman Fort and the Roman Fort at Brecon. All the forts built at this time were constructed from earth and timber.

At Gelligaer, the early fort lies to the north-west of its stone successor and is now outlined by only a faint bank.

The camp is of a playing-card shape and  lies only about 165 feet (c.50 m) outside the north-west defences of the fort and was seemingly aligned with them. The enclosure measures about 570 feet from north-east to south-west by about 420 feet transversely (c.174 x 128 m), an area of around 5½ acres (c.2.22 ha). The entire perimeter of the camp is known but only two gateways are recorded, one placed centrally in the north-east side, the other in the north-west side about one-third of the way in from the western corner-angle; the camp therefore faced towards the south-west and the Silures.

When excavated by Ward in 1960 the defences were found to consist of an earthen bank in access of 20 feet (c.6.1 m) wide at its base, fronted by two ditches, each about 11¼ feet wide (c.3.4 m) separated by a berm of around 7½ feet (c.2.3 m). At this time it was thought to be a it was a temporary camp occupied during the construction of the stone fort.  However further investigations by Jarrett in 1963 in the southern angle revealed the post-holes of timber buildings with at least two construction phases, the final phase showing signs of destruction by fire. In light of these findings it is assumed that this camp was of a more permanent nature, built to accommodate a large unit and was a Flavian or Trajanic turf and timber fort, the precursor of the later stone-built fort. The size of the camp suggests that it was intended for a garrison of 1000 infantry or possibly 500 cavalry.

A re-examination of the pottery from the site would support its construction as part of the Flavian conquest (mid70s), but an earlier date cannot be totally precluded.

Although best observed from the air, the defences of this encampment may still be traced in the fields on the opposite side of the access road from the Rectory as a slight bank only 1 foot high and almost 40 feet wide (c.0.3 x 12 m).

It is possible that there may have been a small civil settlement outside the camp, on the site subsequently occupied by the stone Site of early fort Stone fort.
References for Gelligaer 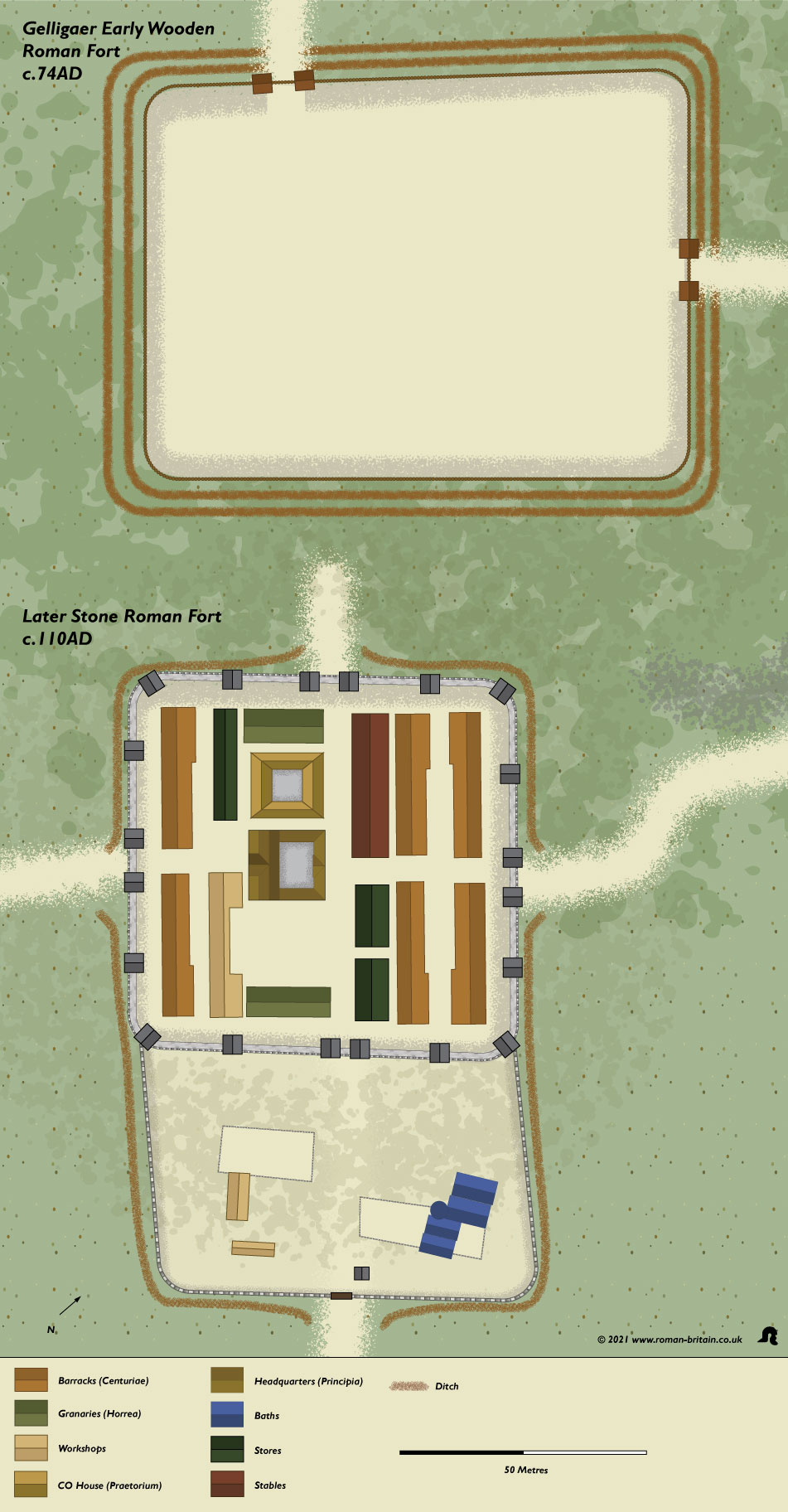