Gelligaer Roman Fort is located on the hill top between the Taff and Rhymney. It commanded an extensive view of the countryside, which in Roman times would have been heavily wooded. It is an Auxiliary Fort that was first excavated towards the end of the 19th century.

Flavian pottery suggests an early construction date for the original roman timber fort at Gelligaer, which was replaced in stone around the turn of the second century, at the same time a bath-house was built within an annexe attached to the fort’s south-eastern defences. Antonine pottery dated c.170AD confirms a continuation of occupancy into these times. The well of the principia (regimental H.Q. building) in the centre of the fort was filled with debris around the period 196/7AD, which may indicate either demolition of the interior buildings by the Romans themselves as part of a planned withdrawal, or destruction of the fort by an enemy force. This was a particularly unsettled period of Romano-British history, and both of these scenario’s are possible. Either way, the fort was soon reoccupied, as the granaries were rebuilt sometime during the Severan period (c.197-211AD), and continued occupation at the fort is attested by the presence of third and fourth-century pottery found within the defences.

The fort was defended by a wide outer ditch and an earthen rampart faced on both sides by a stone wall. There were corner and interval towers and four double-arched gateways. Inside, the buildings are all of stone. The impressive headquarters building stood at the centre of the fort and next to it lay the residence of the unit’s commander (Praetorium). A workshop with a yard and two granaries (Horrea) – for the storage of grain or other perishables (vegetables and meat) – completed the central range of buildings. The men lived in six L shaped barrack blocks  (Centuriae), one for each century of 80 men and their centurion. Other buildings within the fort were probably used for stores and a stable for the baggage animals belonging to the unit.

Outside the fort on the south-east side was a walled annexe containing the Gelligaer bathhouse, where the soldiers could relax when off duty. Attached to the north-east of the fort was the parade ground, used for drill, weapons training and religious festivals.

There are five inscriptions on stone recorded in the R.I.B. for Gellygaer, three of which mention the emperor Trajan (vide infra) and another which reads …GERM … … TRIB P P …PM I (RIB 398), may also be attributed to him. The last two inscriptions above with references to the fifth consulship of the Emperor Trajan (which he held in A.D.103), indicates the approximate date when the stone fort was built. Although, it could have been constructed at any time between 103 and 111, for Trajan did not hold his sixth consulship until A.D. 112.

RIB397 - Dedication to the Emperor Trajan

For the Emperor Caesar Nerva Trajan Augustus, conqueror of Germany, conqueror of Dacia, son of the deified Nerva, pontifex maximus, with tribunician power, father of his country, five times consul, four times acclaimed Imperator, the Second Legion Augusta (built this).
[...]ES DIVI
[...    ]ER TRAIANO
[...]RM DAC PONT
[...  ]RIB P P P COS V
[...]I
[...]
Trajan's fourth salutation fell in 102, the year of his conclusion of the First Dacian War. Line 6 presumably contained the name of the working unit, more widely spaced with no indentation in order to balance the first four lines. The name is not certain, but leg ii avg is very highly probable.

... conqueror of Germany, ... with tribunician power, father [of his country]... four times acclaimed imperator ..
[...  ]ERM [...]
[...] TRIB P P [...]
[...]PM I[...]
It is surprising to find parts of two Trajanic inscriptions at the same gateway. Ward suggests that it may have come from another structure and formed part of the building-material which was assembled outside this gate when the fort was dismantled.This presumably dates to A.D. 103-11, on the analogy of RIB 397.
The only other inscription is a ‘centurial stone’ recording the work done by a particular century of men which, unfortunately, does not name their unit (vide supra). The garrison unit of the fort is not known.

The century of ... (built this).
𐆛 DEMIO
The name has been miscopied.

The site was explored in haphazard fashion by the Cardiff Naturalists’ Society 1899-1901 and then by John Ward, Curator of Cardiff Museum and Art Gallery, who undertook further excavations outside the fort between 1908 and 1913. The results have been considered a textbook example of a Roman fort garrisoned by a cohors quingenaria (an auxiliary infantry unit of 500 men).

Other Sites Near Gelligaer Roman Fort

There are several practice works in the immediate area of the Gelligaer Roamn Fort. There is also a large temporary marching camp some 9½ miles to the west at Twyn-y-Briddallt (ST0098). The Fort was one of a line of forts, generally set on the higher land between the river valleys, running from Cardiff to Y Gaer (Brecon).

The field that the Roman fort is situated is now a horse paddock. There are a couple of plaques and you are allowed to walk around the grassy mounds that indicate the site of the fort. 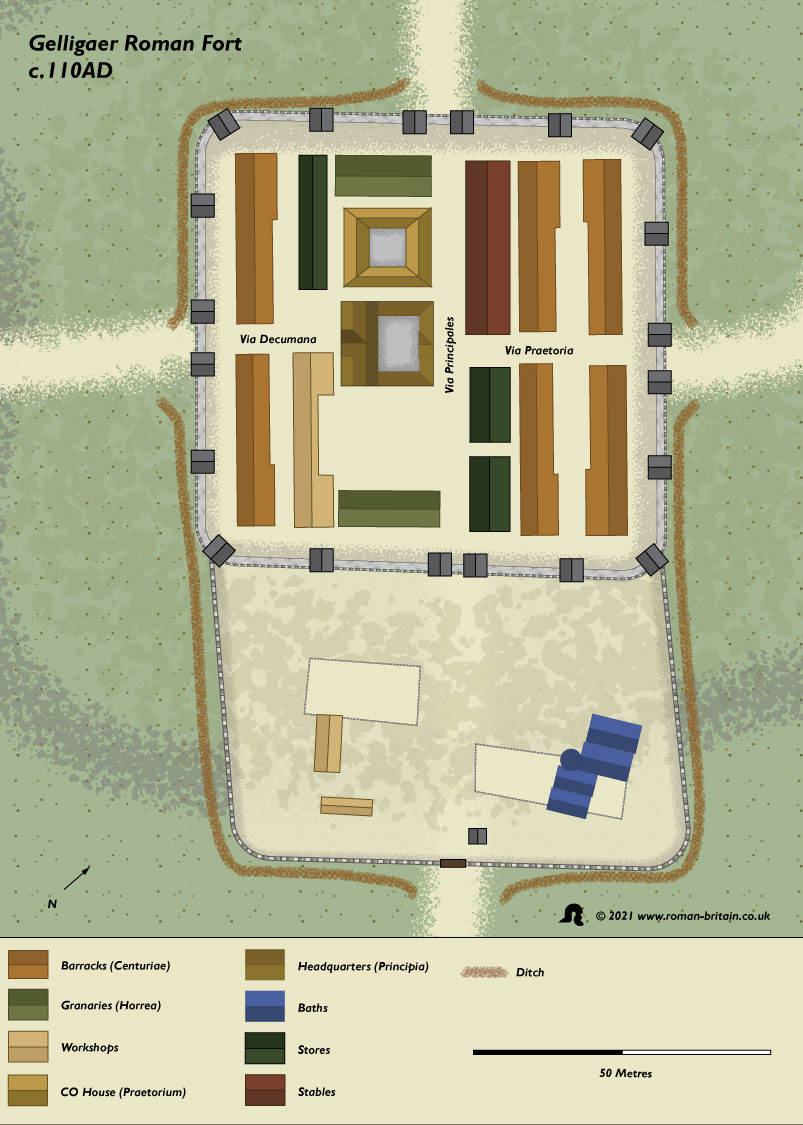