The Roman town of Venta Silurum, the civitas capital of the Silures tribe, underlies the present town of Caerwent in Gwent. The main Roman road from the colonia at Glevum (Gloucester) to the legionary fortress at Isca Silurum (Caeleon) passed through the geometric centre of the settlement. Thankfully, when the route was widened in recent times to become the modern A48 trunk road, Caerwent was bypassed to the north and this historic site was preserved.

The town was founded c.75AD after the tribe had been finally subdued by the campaigns of Sextus Julius Frontinus. The majority of the remaining population of the tribe was gathered from the hills and valleys of Gwent and Monmouth and housed together in a new settlement at Caerwent, which site was obviously chosen in order to keep separate the subdued parts of the tribe from those still causing trouble further to the west. The routing of the road through the centre of the settlement was also deliberate, in order to let the people who were relocated see the benefits of Roman civilization which were paraded before their eyes each day along the military supply route.

At first the settlement would have been undefended, Imperial permission was required to construct defences, and presumably this was not done for fear of native rebellion.

By the late second century AD the town was thriving, probably with a population of circa-2,000, and initial basic defences were built. Caerwent defences were probably strengthened as the result of a temporary emergency, such as piratical raids. These would have been earthworks which could be erected cheaply without the aid of a skilled mason. The defences were comprised originally of a single massive earthen rampart and ditch, which enclosed an area of forty acres (eighteen hectares).

The early defences were replaced in stone around 330 A.D., and an external double ditch added. These later stone walls may have originally reached a height in excess of twenty-seven feet (eight metres). The town was entered via four gates, the largest being in the east and west gate on the route of the main road. The south and north gates were smaller single arched gates.

Soon after the walls were built, external towers were added to the south and north walls.  Six to the south and five to the north. A hoard of coins having a terminal date c.350AD was found beneath the cobbled floor of this tower.

The Second Augustan Legion left Caerleon towards the end of the third century. This probably lead to the town having an army garrison of its own. This is supported by the amount of late military equipment found here. After this point the north and south gates were blocked up.

The town was divided into a regular grid of streets of twenty insulae (literally ‘islands’) or City Block’s, of roughly equal size. Several public buildings have been identified, as one may expect, clustered near the centre of the settlement. A forum and basilica take up the entire central insula to the north of the main road, and a public bath-house was situated in the north east corner of the insula opposite, fronting onto the southern side of the main road. A small amphitheatre was built to the north-east of the forum at a later date; it violates the neat pattern of the street grid, being built over the top of the northward internal road leading from the north-east corner of the forum complex.

The houses in the settlement were generally small and modestly appointed, with only a few in possession of tessellated or mosaic floors, hardly any having hypocaust heating or adjoining bath-houses. The Silures were, it seems, never to attain the refined Roman qualities and its associated wealth, as did their close neighbours the Dobunni from Gloucestershire and Hereford & Worcester, who were to build many villas in the hills surrounding their own civitas capital at Corinium (Cirencester, Gloucestershire). There is no such outlying pattern of villas surrounding the Silurian capital.

No military finds have been recovered from within the enclosure, which points to the town being founded on a virgin site.

The town declined gradually from the 2nd century, and by the late 4th century many of the houses were falling apart and the basilica was used as a blacksmith’s workshop.

Venta Silurum or Venta Silvrvm – The Market Town of the Silures – The Roman name for Caerwent first appears in the Antonine Itinerary of the late-2nd century. Iter XIV of this document, “an alternate route from Isca [Silurum] to Calleva [Atrebatum]“, lists a station named Venta Silurum, 9 miles from Isca Silurum (Caeleon) and 14 miles from Abona (Sea Mills, Avon), this latter part of the itinerary likely represents a journey by ferry across the Bristol Channel to the seaport serving the thriving Romano-British spa-town at Aquae Sulis (Bath, Avon).

The town is also mentioned in the Ravenna Cosmology of the seventh century, this time as Ventaslurum (R&C#48), between the entries for Pontes (Staines, Surrey) and the unknown road-station Iupania. The name of the Roman town, Venta Silurum, means ‘the market town of the Silures‘, and is partially carried through in the present name of the modern town Caer-went, which is Welsh for ‘fortified place with a market’.

A grand total of nine Latin inscriptions on stone are recorded for Caerwent in the R.I.B.. Thwo of these texts are only fragmentary (RIB 3077 & RIB 315), and another two, reading ABCD and CDRF (RIB 313 & 314) may have been teaching aids.

The most famous of the remaining inscriptions is the so-called Civitas Silurum stone.

For [Tiberius Claudius] Paulinus, legate of the Second Augustan Legion, proconsul of the province of Narbonensis (Gallia), emperor's propraetorian legate of Lugdunensis. By decree of the ordines for public works on the tribal council of the Silures (set this up)..
TI[berio] CLAVDIO PAVLINO LEG[atvs] LEG[ionis] II AVG[vsta] PROCONSVL PROVINC[iae] NAR RBONENSIS LEG[ato] AVG[usti] PR[o]PR[raetore] PROVIN[ciae] LVGVDVNEN[sis] EX DECRETO ORDINIS RES PVBL[cae] CIVIT[atis] SILVRVM
The inscription is dedicated to Tiberius Claudius Paulinus - After holding the posts of Legate of the Second Legion (during the reign of Caracalla 211-17), proconsul of the province of Narbonensis, and imperial governor of the province of Lugdunensis) Paulinus became imperial governor of Lower Britain under Elagabalus (A.D. 220). The present inscription, therefore, dates shortly before A.D. 220. Paulinus obviously impressed the Silures enough for them to dedicate this statue with a record of his career to him

This stone appears to have been the base of a statue (now lost?), and bears an important inscription which confirms the existence of the Civitas Silurum or the Romanized self-governing body of the Silures tribe. The so-called ‘Civitas Silurum Stone’ is now on display in Caerwent church. It tells us that the tribe was runby a council or Ordo which could pass decrees. As the tribal council was acting on behalf of the whole of the Silures, not just the town, it demonstrates that a civitas should be seen as representing the whole territory.

Between 1899-1913 the ‘Caerwent Exploration Fund’ was established to explore two-thirds of the site which has led to large areas of the town being uncovered into the impressive open-air museum that Caerwent is today. The following sites were found:

Altarstones to Warrior Gods and Heroes

Excavations revealed a number of altars and statuettes. The following small altar mentions Mars-Ocelus, he was a British/Silurian deity (Ocelus was only  mentioned on one other alter, in Carlisle). This is a good example of religion in Roman Britain being a mixture of Roman Gods and Godesses being linked with their Celtic equivalents.

Given the proximity of the legionary fortress it is not inconceivable that a veteran optio, upon receiving his discharge at Isca, may have chosen to live close to his old legionary friends in the settlement at Venta, especially if he had taken a native Silurian wife, for example. Optiones would not be particularly rich, and the lower-status houses here, within easy sailing distance of the luxurious spa town at Aquae Sulis only twenty miles or so across the Bristol Channel, would have been an excellent retirement home. It should also be noted that although not rich by Roman standards, Augustinus would have been a veritable Croesus in comparison with many of his Silurian neighbours, after all, he had spare cash enough to dedicate an altarstone to Mars (RIB 310 supra), and it may not be by chance that this stone is one of only a few so far discovered (i.e. there are no others to be found). In addition, his Roman citizenship and military training would have made him a natural contender for a place on the town council, especially if, as I have surmised, he took a native wife.

To the god Mars Lenus or Ocelus Vellaunus and to the Divinity of the Emperor Marcus Nonius Romanus, in return for freedom from liability from tax granted to his guild, gave this gift from his own resources on 23rd August in the consulship of Glabrio and Homulus.
[...] MARTI LENO
[...]IVE OCELO VELLAVN ET NVM AVG
M NONIVS ROMANVS OB
IMMVNITAT COLLEGNI
D D S D
GLABRIONE ET H[...]VḶO COS [   ] X K SEPT
Lenus Mars was a Rhenish God from Trier (eastern Gaul)- was a Celtic healing god worshipped mainly where he was almost always identified with the Roman god Mars. he is equated with the local God Ocelus Vellaunus. This Caerwent inscription was dedicated in A.D. 152 on 23 August; which was the festival of the Vulcanalia.

The West Gate barns area provides car parking, level access to toilet facilities and interpretation panels. The principle visible remains are the complete circuit of the town walls, in places still over sixteen feet (five metres) high, the foundations of several Roman houses and shops to the west of the forum in Pound Lane, and a small Romano-British temple, octagonal in outline, which lies outside the eastern gate to the north of the road. Some finds may be viewed at Caerwent church, but the majority are on display in Newport Museum and the National Museum of Wales in Cardiff.

Caerwent, ‘the stronghold of Gwent’, derives its name from the Welsh words ‘Gaer’ and ‘Gwent’. 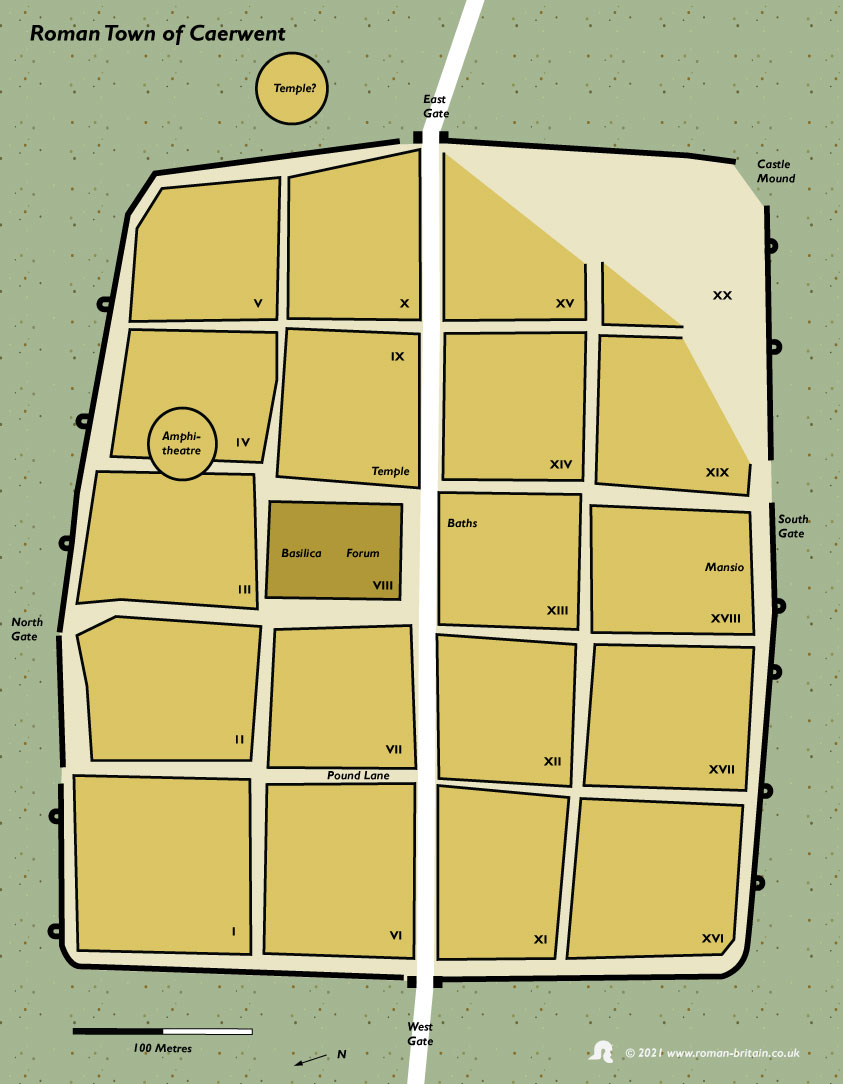 Any daylight hours – Follow signs off A48 between Newport and Chepstow, Postcode NP26 5BA.