Bryn Y Gefeiliau, also known as Caer Llugwy, was a 1st century Roman fort which stood beside a loop of the Afon Llugwy, in the scenic steep sided  Llugwy Valley. The fort was occupied from about AD 90-120 and may have been built to control lead mining and smelting in the area.

This late-Flavian fort of almost 4 acres (c.1.6ha) was built c.90AD, possibly upon Agricolan foundations. The rampart was constructed of earth resting upon a cobble foundation with a core of piled stones. Around AD 120 a new fort was built in stone across the eastern rampart walls of the earlier fort, this created an annexe of about 2 acres in the west. The fort would have housed a garrison of 500 auxiliary soldiers.

Bryn-y-Gefeiliau is also known by the name “Caer Llugwy” due to its location beside the Afon Llugwy near Betws-y-Coed.  Bryn y Gefeiliau translates as ‘Hill of the Metalsmiths’, suggesting that the fort was established to control lead mining in the region.

There is a Roman marching camp about five miles to the west at Pen-y-Gwrhyd (SH6555), at the foot of Mount Snowdon.

What did Bryn Y Gefeiliau Roman Fort look Like?

The defences were found to consist of two V-profiled ditches and a turf and clay rampart standing on a stone kerb. Although gateways were only identified on three sides of the fort, there may have been a fourth. The eastern gate was centrally placed, but both the southern and western gates were offset from the usual position usually found on a standard Roman fort layout.

The 25 m by 25 m  principia is the only well-defined building in the interior of the fort and is located at the south-western end of the currently visible square earthwork. The courtyard and rear range of rooms were identified, and a cross-hall defined by a wall running across the centre of the building with a central entrance. This design is similar to the early principia at Segontium.

The ditches and gate behind the principia show that the fort was subsequently divided into two. A new array of defences was constructed across the existing fort and the
retentura was re-used as an annexe.

Ruins survive of a large courtyard building of stone was built within the annexe. This building, thought to be a bath-house or a mansio, still stands to a height of 3 feet in places. These buildings appeared to be part of a later phase of activity overlying pottery deposits dated to A.D. 90-120.  The site was probably abandoned around AD 140 though it may have been used intermittently after that time.

Remains were first recognised in the mid seventeenth century by Edward Lhuyd when ‘brickwork’ structures were noted.  Samuel Lysons in a paper to the Society of Antiquaries in 1807 recording that ‘an abundance of building materials have been taken from these remains, for several years past’ and that a room containing hypocaust pillars was visible.

Excavations in 1920-2 (Hall 1923) revealed details of the plan and phasing. Excavations in the 1920s uncovered vast amounts of pottery fragments, dating from between AD 90 and 120. Their discovery led one observer to describe the site as ‘the first litter spot of Snowdonia’. The best of these fragments may be seen today in the Gwynedd Museum and Art Gallery, Bangor. The excavations in the fort comprised a series of trial trenches that mainly investigated the fort defences and gates along with minor investigations into the nature of the internal buildings.

There was little further investigation until a geophysical survey in 2000.

Trajanic pottery and “a little Samian ware” of the Antonine period probably point to the fort becoming disused before the third century; perhaps being temporarily abandoned during the reign of Hadrian c.120-150 as suggested by Dr. Simpson, in view of the scarcity of pottery of the period.

No evidence for occupation beyond A.D. 140 was recorded by the excavators but subsequent re-evaluation of the ceramic evidence by Dr Grace Simpson suggests that the abandonment could have occurred sometime after the late second century

Rogers’ later re-evaluation of the Antonine pottery suggests that there is less evidence for later occupation than stated by Simpson.

The site is on private land north of a minor road which leads to Caer Llugwy. It is situated on the south bank of the Afon Llugwy. The minor road leaves the A5 about 1/2 mile west of Swallow Falls. Although there is not much to see of the fort the valley has remained largely unaltered since the Romans were here.

It stood near the line of a road from the forts at Caerhun and Tomen-y-Mur. 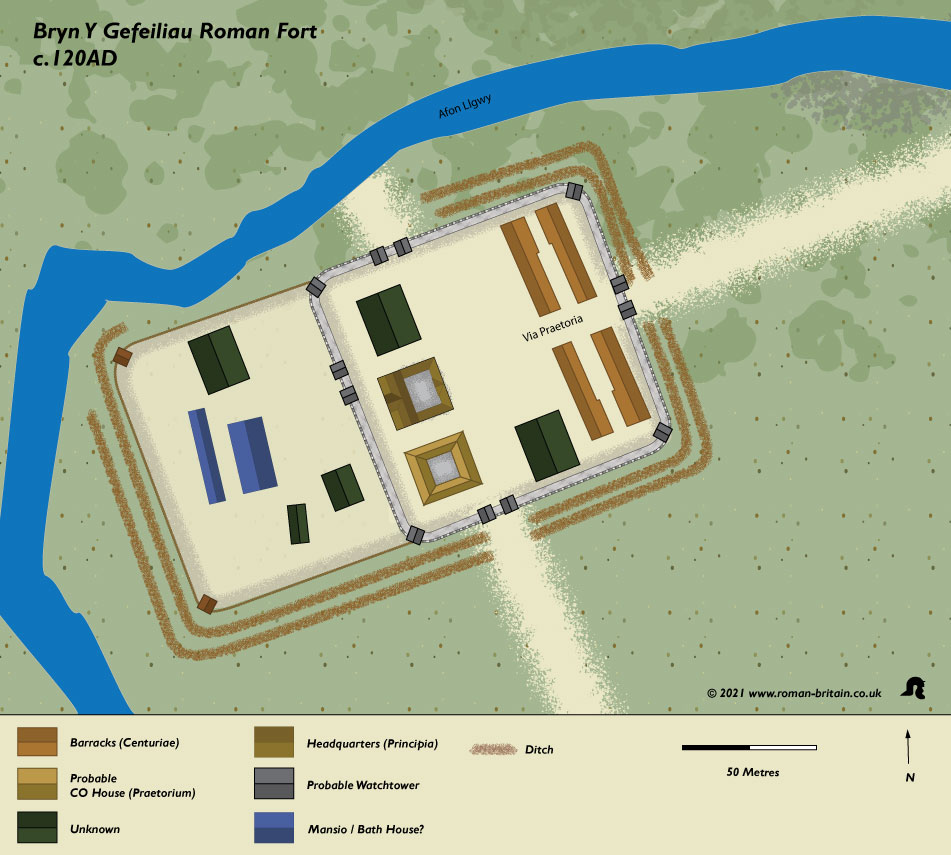