The Roman Auxiliary Fort at Loughor/Leucarum was built around 75 AD to guard the lowest crossing of the River Loughor.  The fort was occupied continuously until the early 120s. The fort was then reduced and was reoccupied from c. 270 until the early fourth century. Its location provided good visibility across the region and enabled it to support naval units operating in the Bristol Channel. It also controlled a ford across the River Loughor; this ford had probably emerged by the time of the Roman period, and was passable at high tide.

Although a bath-house discovered in 1851 confirmed a Roman presence in the area, the actual location of the suspected garrison fort was not established until 1969 when excavations on the site of the Norman motte revealed the eastern corner-angle of the Roman fort lying beneath the later castle mound. Investigations over the following year located and confirmed the position and orientation of the north, south and east ramparts, but the the western defences lie somewhere beneath the railway embankment, which curves around the Norman castle and the church to the south and west.

The original (timber-built) fort measured around 410 feet (c.125 m) NNW-SSE but the transverse dimension, the major axis of the fort, remains uncertain. Original defences consisted of a single ditch only 4½ feet (c.1.4 m) deep, backed by a substantial rampart of turf and clay set on a foundation of cobbles some 30 feet (c.9.4 m) thick. At some point (possibly in the early-2nd century) the primary ditch was back-filled in order for the front of the rampart to be revetted with a stone wall 3¼ feet (c.1 m) thick. Corner turrets of stone were included at the same time, along with two shallow secondary ditches, the inner measuring 8 ft across, while the outer was 5½ ft (c.2.5 + 1.7 m). These ditches were filled-in and covered with a thick layer of clay sometime during the 3rd century.

The original defences comprised a rampart fronted by a single V-shaped ditch. The rampart was 28 feet (8.5m) wide at the corner-angle, expanding to 35 feet (almost 11m) on the north side towards the River Loughor.

Occupation started c. 75 and was represented by the construction of a rampart formed from a core of gravelly clay faced with cheeks of turf and grey-white clay fronted by a single V -shaped ditch. At the south-eastern corner of the fort the rampart was founded upon a raft of river cobbles to prevent slippage, but in the north-eastern corner, where the slope immediately outside the defences was steeper, the defensive bank was set on a terrace cut into the natural subsoil. Although parts of the north-eastern corner of the defences had been truncated by later activity, sufficient had survived to suggest that the ditch had been cut to a depth of c. 2 m and that the basal width of the rampart measured between 8.5 m and c. 11 m. This variation may have occurred as a result of the sharp drop in ground level towards the corner of the fort with the resultant need to achieve extra height in the terraced rampart (Ling & Ling 1973, 107).

The rampart later had a stone facing attached to the front and at the same time, the original ditch was filled in with ‘dirty gravel’ and a new ditch cut beyond. The second ditch silted up naturally – indicating a period of neglect or abandonment – and was augmented by the addition of another ditch further out from the ramparts, this ditch being fitted with some sort of obstacle along its outer lip.

The second phase of activity, which started c. 110, was represented by rebuilding in stone. A one-metre-wide wall, constructed from mortared sandstone blocks set on a foundation of cobbles, was inserted into the face of the existing rampart. As a consequence, the ditch, which was aligned in such a way as to suggest that there would have been insufficient space between its inner edge and the revetment wall, was recut. The replacement ditch was of similar dimensions to the earlier feature, although in places it had been cut unusually close to the revetment wall. No trace of an angle-tower was found, but this may have been removed by the destruction of the upper part of the rampart. A lime-kiln constructed outside the defences was believed to be contemporary. Three cremations were cut into the rear of the rampart; the pottery associated with them implied that the fort had been abandoned c. 120-130.

The final period of activity occurred in the late third century. This was represented by the location of a third ditch outside the line of the earlier defensive features. On the east side of the
fort a double line of defences may have been employed. These ditches were different in size but were shallower than the earlier examples. The north-east angle of the defences was further protected by a chevaux de jrise. Traces of an angle-tower in the eastern corner of the fort were uncovered beneath the castle motte during excavations in 1969/70. Investigations on the site of the northern corner-angle revealed no corresponding tower in this location but did afford a decent section across the fort’s defences, where three main phases of construction were apparent.

Unstratified Flavian samian-ware indicates that occupation began in the late-1st century AD. Pottery found during excavations in 1969-70 ranged from c. AD 75 to 130, and coins of Gallienus and Constantine were found in the last-identifiably Roman occupation layer, possibly indicating that the fort was abandoned before the early-4th century.

Six phases of interior buildings were discerned immediately behind the rampart; no trace of an intervallum road (the perimeter street running behind the rampart on the inside) being found. Two trenches dug in the gardens of Station House in 1971 with the intention of finding the south-western defences, instead revealed the post-holes and sleeper-trenches of more buildings. If these buildings were inside the fort – which appears likely – this must mean that the defences lay further to the west, and therefore enclosed an area in excess of 5 acres (2 ha). It is possible, however, that the fort was not rectangular in plan, but that the northern defences ran along the river-bank, thus giving a trapezoid, almost triangular outline with a loss of about half an acre of internal area.

Where did the name Letocetum come from?

The fort took its name from the Celtic name for the River Loughor. The Celtic leuco meaning ‘bright’ or ‘shining’ and the water suffix ar(a).

The first mention of the Roman name for the Loughor fort appears in the Antonine Itinerary, published in the late-2nd century. The Twelfth Itinerary in the British section of this document details the route between Carmarthen in Dyfed and Wroxeter in Shropshire. The first stage of this route is a station named Leucarum, situated some 15 miles from Moridunum (Carmarthen) and another 15 miles from the next changing-post or mutatione at Nidum (Neath, West Glamorgan).

This evidence is supported by the seventh century Ravenna Cosmology, where, appearing among the rivers of South Wales is the name Leuca (R&C#246), between the entries for the Aventio (Afon Ewenny, Glamorgan) and the Stuctia or Juctius (Afon Ystwyth, Dyfed).

Due to the hilly nature of the terrain in this part of South Wales, and the position of this fort situated at the mouth of the Leuca Fluvius (Afon Llwchwr/River Loughor; see Ptolemy), it is possible that this fort was originally supplied by sea from Nidum (Neath), or directly from the Legionary Fortress at Isca (Caerleon).

Other Roman Sites in the Area

There are a few so-called “military practice works” nearby, one at Stafford Common (SS5997) and another two at Pen-y-waun on Mynydd Carn-goch (SS6097). In addition, there is a substantial Roman building six miles to the south at Mumbles on the coast (SS6188). 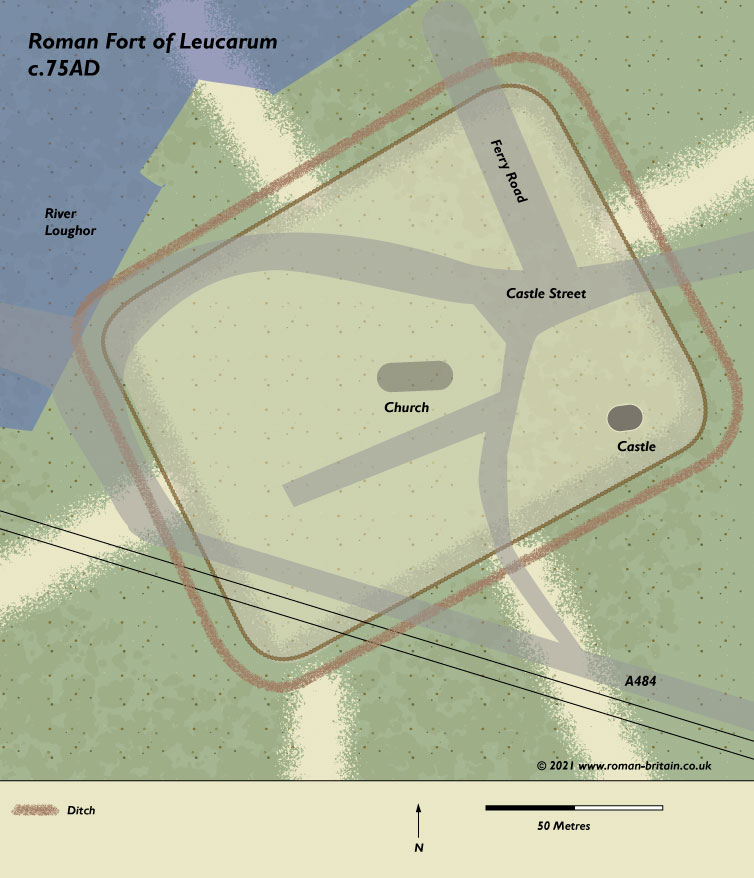